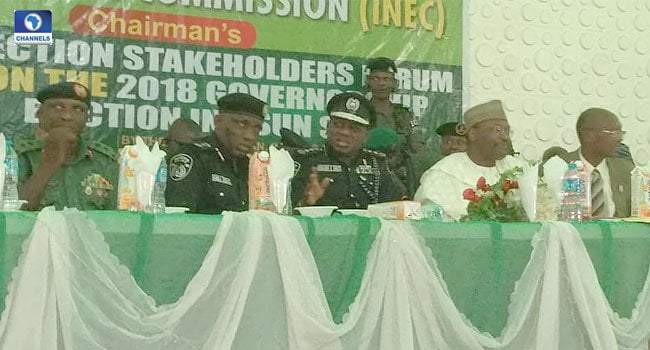 The Inspector General of Police, Ibrahim Idris and the Chairman of the Independent National Electoral Commission (INEC), Professor Mahmood Yakubu are presently in Osogbo, Osun State.

#WeJustHeard
In continuation of his assessment of the state of readiness for the Osun State Governorship Election scheduled for next Saturday, the INEC Chairman, Prof. Mahmood Yakubu on Sunday visited the Commission's office in Ayedaade Local Government area, Gbogan, Osun State pic.twitter.com/aRAo9D7qxX

Naija News understands that the arrival of both officials for a stakeholders meeting comes barely five days to the governorship election in the state.

INEC and the police have expressed readiness for the September 22 election in the state, with both agencies vowing to curb vote buying.

INEC Chairman on his part said that collection of the Permanent Voters Cards (PVCs) in the state will end by 5pm today .

According to him, the number of registration areas is 333, polling Units are 3010, and voting points are 3,765. The state also has three senatorial districts, nine federal constituencies and 26 state constituencies. In all, Yakubu stated that the total numbers of registered voters are 1,682, 495.

He stated this warning on Sunday while briefing journalists on the preparedness on the police in the smooth conduct of the election.He reiterated the commitment of the police in providing adequate security to residents of the state before, during and after the election.