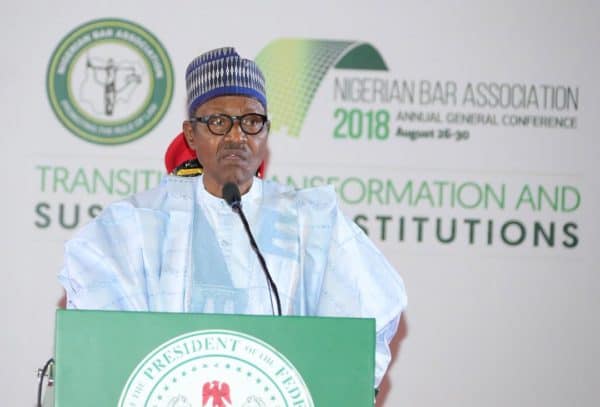 It would be recalled that Buhari, while declaring open the 2018 Annual General Conference of the Nigerian Bar Association (NBA), declared that the nation’s security cannot be sacrificed on the altar of individual rights and rule of law.

The President, in his speech, urged lawyers to put national security over and above the rule of law.

But in a statement on Monday, Kola Ologbondiyan, PDP National Publicity Secretary, said the President’s assertion was a direct trademark of despotic rulers, adding that cannot find expression in a democratic setting.

The party further stated that it adopt every legitimate means to ensure that the International Criminal Court (ICC) holds President Buhari responsible for violations of rule of law and criminal abuse of human rights committed under his rule in the last three years.

The party said it would mobilize Nigerians to stop the President from introducing “the long forgotten trappings of military dictatorship into a democratic regime” which it said Nigerians laboured for many years to attain.

“It is instructive to note that contrary to claims by Mr. President, there is no pronouncement by the Supreme Court that subjugates constitutional rule of law and rights of citizens to the whims, caprices and dictatorial impulses of any President.

“Our national interest is thoroughly embedded, protected, expressed and enforced only under the rule of law as provided by our constitution and there is no how Nigerians can allow an individual to superimpose or override the constitution with his personal whims and impulses; a pattern that is characteristic of known dictators all over the world, as expressed in the obnoxious Executive Order 6, designed to justify a complete clamp down of political opponents ahead of 2019 general elections,” Ologbondiyan stated.

“We know that President Buhari is apprehensive of the electoral defeat that awaits him in February 2019 for which he is seeking ways to subvert the system, but we caution that in this desperation to hold unto to power, he must not seek to again, subvert our constitutional order as he will be firmly resisted by Nigerians”.