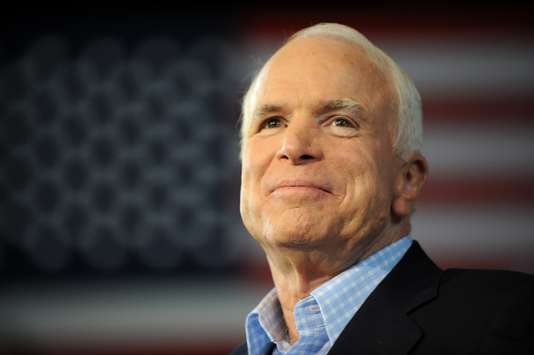 US Mourns As Senator McCain Dies

After the family announced the death of Senator John Sidney McCain III who died at 4:28 p.m. on August 25, 2018. US President Donald Trump and a host of other important personalities have rendered their condolences as well as tributes.

Trump, in a tweet on Saturday evening said: "My deepest sympathies and respect go out to the family of Senator John McCain. Our hearts and prayers are with you!"

Naija News understands the late Arizona Republican, had organised his funeral, and close associates had told the White House in May that he did not want Trump to be invited.

Instead, Vice President Mike Pence, who served with McCain in Congress, would be asked to attend the service, at the ceremony that would be held at the National Cathedral in Washington, D.C.

Pence, in a tweet on McCain's death, said: "Karen and I send our deepest condolences to Cindy and the entire McCain family on the passing of Senator John McCain. We honour his lifetime of service to this nation in our military and in public life. …"

Speaker Paul Ryan also in a tweet said: "John McCain was a giant of our time – not just for the things he achieved, but for who he was and what he fought for all his life. He will always be listed among freedom's most gallant and faithful servants".

Obama, who ran against and defeated McCain in the 2008 presidential election, said in a statement that all Americans were in debt of the late senator.

"John McCain and I were members of different generations, came from completely different backgrounds, and competed at the highest level of politics.

"But we shared, for all our differences, a fidelity to something higher – the ideals for which generations of Americans and immigrants alike have fought, marched, and sacrificed.

"We saw our political battles, even, as a privilege, something noble, an opportunity to serve as stewards of those high ideals at home, and to advance them around the world. …," Obama said.

Former President George W. Bush, who was also a political opponent of McCain during the 2000 Republican Party primary election, lauded his career serving the U.S., first in the military and war, and second in the U.S. Congress.

Bush said: "Some lives are so vivid it is difficult to imagine them ended. Some voices are so vibrant, it is hard to think of them stilled.

"John McCain was a man of deep conviction and a patriot of the highest order. He was a public servant in the finest traditions of our country. And to me, he was a friend whom I'll deeply miss…."

Former President Bill Clinton and his wife, Hillary, said in a statement: "Senator John McCain believed that every citizen has a responsibility to make something of the freedoms given by our Constitution, and from his heroic service in the Navy to his 35 years in Congress, he lived by his creed every day.

"He was a skilled, tough politician, as well as a trusted colleague alongside whom Hillary was honoured to serve in the Senate. He frequently put partisanship aside to do what he thought was best for the country, and was never afraid to break the mould if it was the right thing to do.

"I will always be especially grateful for his leadership in our successful efforts to normalise relations with Vietnam. …"

Former U.S. President Jimmy Carter said: "John McCain was a man of honour, a true patriot in the best sense of the word. Americans will be forever grateful for his heroic military service and for his steadfast integrity as a member of the United States Senate…."

Canadian Prime Minister Justin Trudeau similarly described the late Senator McCain as an American patriot and hero whose sacrifices for his country, and lifetime of public service, were an inspiration to millions. Canadians join Americans tonight in celebrating his life and mourning his passing".

Former Vice President Al Gore described "McCain was an American hero and a true patriot. I always admired and respected John from the opposite side of the aisle, because he thrived under pressure, and would work to find common ground, no matter how hard".

Sarah Palin, McCain's running mate in 2008, said: "Today we lost an American original. Sen. John McCain was a maverick and a fighter, never afraid to stand for his beliefs.

"John never took the easy path in life – and through sacrifice and suffering he inspired others to serve something greater than self".

Sen. Lindsey Graham, a very close friend of McCain at the senate, said: "America and Freedom have lost one of her greatest champions. ….And I've lost one of my dearest friends and mentor".

Nancy Pelosi, the Minority Leader of the U.S. House of Representatives also mourned McCain: "He was a patriotic, courageous hero who served his country above all. You will be missed, Senator McCain. May you Rest In Peace".

Sen. Bernie Sanders tweeted: "As you go through life, you meet few truly great people. John McCain was one of them. His dedication to his country and the military were unsurpassed, and maybe most of all, he was a truth teller – never afraid to speak truth to power in an era where that has become all too rare".

McCain decided to stop treatment for the brain cancer he had been battling for over a year, his family announced on Friday, precipitating a rare moment of bipartisan empathy for the Vietnam war hero.

In July 2017, McCain was diagnosed with a tumour called a glioblastoma, which is an aggressive type of brain cancer but returned to the Senate after his diagnosis and cast a pivotal vote against a Republican bill to undo the Affordable Care Act – Obamacare.

Since December, he never returned to the Senate as he underwent treatment in Arizona, where he kept a low profile, issuing written statements on major news developments but offering the public few glimpses of his condition.

McCain collaborated with a long-time adviser, Mark Salter, on a memoir, "The Restless Wave," that was released in May.

The senator is survived by his mother, Roberta; his wife, Cindy; two sons and a daughter from a first marriage, Douglas, Andrew and Sidney; four children from his second marriage, Meghan McCain, Jimmy McCain, Jack McCain and Bridget McCain; a brother, Joseph McCain; a sister, Jean McCain Morgan; and five grandchildren.

McCain's death opens up a Senate seat that party leaders expect to remain in Republican hands for two more years because under state law, Republican Gov. Doug Ducey would appoint a successor who must be from the same party as the person vacating the seat.

McCain died after the deadline to file for this year's election, and as a result, the successor-senator would not have to face re-election until the 2020 election.