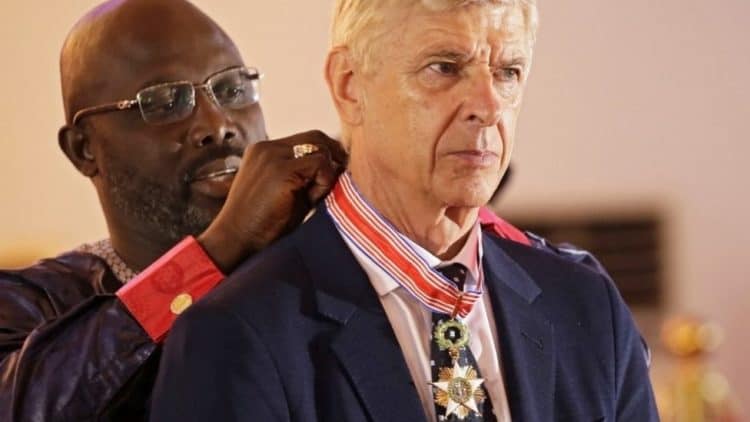 Ex-Arsenal manager Arsene Wenger has been honoured by Liberian President and former football star George Weah, with the  highest honour in the country in a ceremony on Friday.

The former Gunners manager was recognized for his role in African football especially with regard to George Weah’s spectacular career.

Wenger found Weah playing for Cameroon’s Tonnerre Yaounde and brought him to French side Monaco in 1988.

A move that initiated the career of the Liberian president in Europe’s top clubs, including AC Milan, Paris St Germain and Chelsea, and culminated into him winning the prestigious World Footballer of the Year and won the Ballon d’Or, still the only African to win either award.

“You proved yourself as a teacher when you revolutionised forever the approach of scouting young talents all over the planet, particularly throughout Africa,” Weah said of Wenger during a ceremony in the capital Monrovia.

Wenger was named a Knight Grand High Commander of the Humane Order of African Redemption, the highest rank in Liberia’s Order of Distinction.

His unlikely rise, from kicking a ball on the dusty streets of a Monrovia slum to world fame, won him support in one of the world’s poorest countries.

The 14-year civil war that ended in 2003 and an Ebola outbreak which killed thousands from 2013-16 has mitigated against the development quest of the country in recent time.

“I think Wenger deserves it. If he had not spotted ambassador Weah in those days, he would not have reached this level,” said university student Cynthia Kollie.

Some Liberians were not welcoming of the idea, as they believed that the move was based on the personal bias of the president.

“President Weah is bestowing our nation’s highest honour on his two former football coaches who have made no direct impact or contributed to Liberia’s collective interest,” said Martin Kolle, a student.