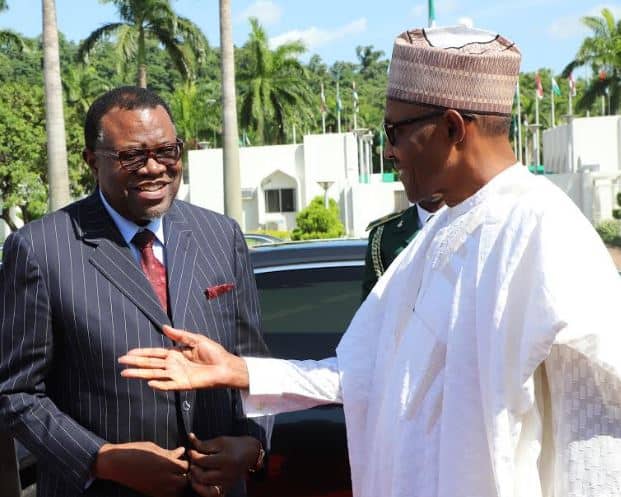 President Muhammadu Buhari (r) welcoming President Hage Geingob of Namibia as he arrived for a one-day visit at the State House, Abuja.

In his quest to ensure effectiveness in it fight against corruption, President Muhammadu Buhari has assured that his administration would soon reorganise the nation’s judiciary.

Buhari made this known during a joint news conference with the visiting Namibian leader, Mr Hage Geingob, after a closed door session at the Presidential Villa, Abuja.

He disclosed that plans are being worked on by his administration to ensure that dedicated judges are are assigned for corruption cases and those found culpable be brought to book.

“So we are willing but it’s very difficult under this multi-party democracy system; We are getting the cooperation of countries.

“We are trying to sell the assets wherever we found them and bring the money into the Nigerian treasury. This is all I can say at this stage because we are reorganising the judiciary.

“We are going to dedicate some judges to deal with corruption cases and try to put forward and prosecute all those that investigations proved that they have questions to answer.

“So that is what I’m telling you that we haven’t given up; we are doing our best and we will recover as much as humanly possible.’’

President Geingob, in his response showed his appreciation for the government of the country, especially in its support and assistance to Namibia via the deployment of volunteers under the Technical Aid Corps.

late Prof. Adebayo Adedeji, according to President Geingob was the reason why he was in the country; he was in Nigeria to pay his late respect to a man he called his mentor.

The former Executive Secretary of the Economic Commission of Africa, Adedeji who died on April 25 at the age of 87, will be buried on July 7.

The Namibian President acknowledged the efforts of president Buhari to fight corruption in the country, while lamenting the problem of corruption was militating against the progress of the of the African continent.

He added that President Buhari had taken steps towards fighting corruption in Nigeria worthy of emulation by his country.

“He (Buhari) is taking steps that will encourage all of us. I declared war against poverty and corruption.

“I declared my assets publicly. I therefore emulate my brother here,’’he added.