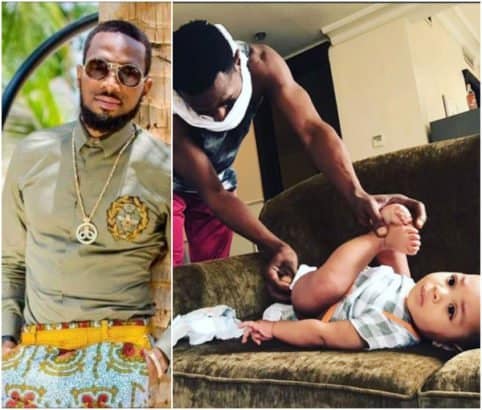 Police Mourn With D’Banj Over The Death Of His Son

The police in Lagos on Monday said that popular Entertainer ‘Dbanj’ would report the circumstances that led to his son’s death to the police when the mourning period is over.

In a statement published on the official Instagram handle of the Lagos State Police Command on Monday, it said the Divisional Police Officer, Ikoyi Division, Mustapha N’Abba delegates  visited the bereaved singer’s residence to pay a condolence visit but met his absence.

“The Commissioner of Police, Lagos State, CP Edgal Imohimi, on behalf of officers and men of Lagos State Police Command, wishes to commiserate with the family of Mr and Mrs Oladapo Daniel Oyebanjo a.k.a D’BANJ @iambangalee on the death of their one year old son, Daniel(Jnr) Oyebanjo whose sad event took place yesterday 24/06/2018, at the Ikoyi-Lagos residence of the family.

“The CP wants the family to know that at this period of their grief, the entire Command shares in their pain. It is expected that when the mourning period is over, the family will formally report the circumstances that led to the unfortunate death of little Daniel to the police. May his soul rest in peace. Amen.”

As earlier reported by Naija News, Daniel, who celebrated his first birthday in May, reportedly drowned in a pool in his parent’s Ikoyi residence.

The singer’s other colleagues and fans alike have also been commiserating with him. Dbanj and his Management are yet to make any official statement.

Meanwhile individuals have been making suggestions that the bereaved entertainer is carelessly responsible for the death of his son.

According to a sources close to the couple, Daniel ( D Banj) was playing with a couple of family friends who paid them a visit at their residence in Ikoyi Lagos on Sunday when the boy wandered away into the backyard where he fell into the pool.

His mother who left the boy with grown kids believing that they are capable of taking care of him later learnt that the boy body was found inside the pool.

He was rushed to the hospital in an unconscious state where he was certified dead.

The body of the late infant has been transferred to the mortuary.