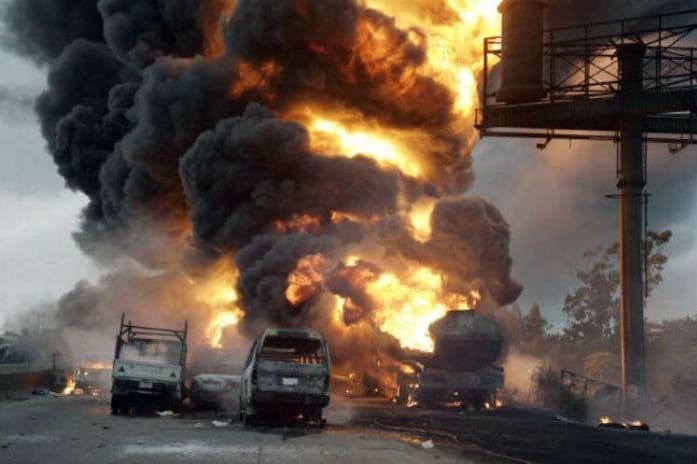 A petroleum Tanker explosion in in Ushongo Local Government Area of Benue have claimed the lives of 4 people who were burnt beyond recognition and 40 others sustained various degrees of injuries.

The tanker suddenly exploded when the victims were busy scooping fuel from the fall tanker.

Punch learnt that the incident happened at Gbatse settlement in the council area when a tanker carrying Premium Motor Spirit fell and later exploded.

Naija News gathered that vehicles, motorcycle, and house close the fallen tanker was consumed by the raging fire.

The infeno which started at about 10:00 am was said to have lasted several hours, which made rescue difficult.

some of the eye witness at the scene of the incident have divergent opinion has to how the fire stated.

Some eyewitness claimed that struggle by those scooping fuel caused the explosion when the metal buckets they were using scratched another.

Others are of the claim, that there were gunshots by some security persons to scare away those who were scooping fuel, and that the gunshots ignited explosion.

“The incident happened around 10. As the tanker fell, many people rushed to the scene and we’re scooping fuel that was gushing out.

“The next thing we had was a loud explosion. The explosion caught many people unprepared, and by the time we tried to rescue the victims, four persons were burnt completely. We could not recognise them. More than 40 persons were injured.”

Some of the victims with severe burns were taken to Benue State University Teaching Hospital for treatment on the order of Governor Samuel Ortom.

The Chief Medical Director of the hospital was also seen taking the Commissioner for Health and Human Services, Dr. Cecilia Ojobo, round the Accident and Emergency ward for briefing.

Dr. Terlumun Swenden, The Chief Medical Director, told our correspondent that the hospital was doing its best to save victims despite the ongoing strike by members of JOHESU.

“The governor directed that victims with severe burns be brought to the hospital here, and they brought here on Monday.

“As you can see, doctors are attending to them, but it is a serious case,” the medical director said.