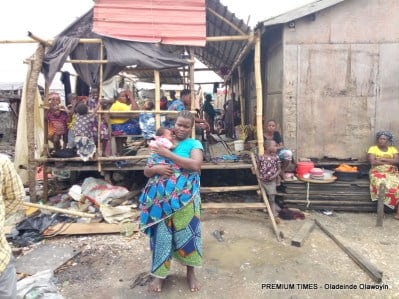 Evicted Otodo-Gbame Residents Crowd RCCG headquarters, Cry To Adeboye To Plead With Osinbajo To Intervene In their Crisis

Evicted residents of Otodo-Gbame waterfront communities on Tuesday besieged the headquarters of the Redeemed Christian Church of God, RCCG, in Oyingbo.

They also explained that they are pleading with the general Overseer of RCCG, Pastor Enoch Adeboye to speak to the Vice President, Yemi Osinbajo,(Osinbajo is a pastor of the Redeemed Church) to intervene in the lingering Otodo-Gbame crisis.

The residents, who were joined by the residents of other waterfront communities, said they have been through harsh conditions since the final eviction.

Supported by some human rights organisation, they were still at the RCCG headquarters as at the time of this report.

Premium Times has reported on the plight of the residents since their forced eviction by the Lagos State government despite a court order.

The report reveals the pathetic living conditions of the people, who have had to sleep under open air, exposed to dangerous animals and weather conditions, Naija News understands.