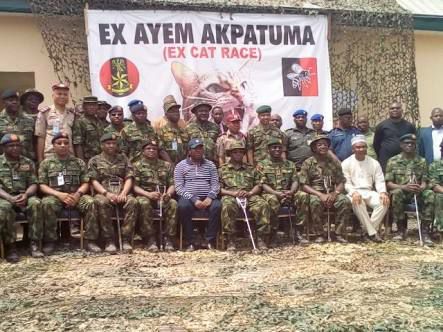 The Nigerian Army has announced it has concluded exercise cat race in Benue, Taraba and Kogi states.

The news on the development was made available to Naija News on Tuesday in a statement signed by Brigadier General Texas Chukwu, Director Army Public Relations.

“The Nigerian Army flagged off Exercise AYEM AKPATUMA on the 20th February 2018 to practice troops in the North Central and parts of North West on planning and conduct of “Military Operations Other Than War.”

“The Exercise was also aimed at further sustaining Nigerian Army’s constitutional roles of defending the territorial integrity of Nigeria as well as aiding the civil authority to maintain peace and security. Exercise “AYEM AKPATUMA” recorded tremendous successes inspite challenges. The Exercise was sustained in some areas in order to consolidate on the gains.”

“However, having consolidated on the gains achieved and the Nigerian Army’s effort of ridding the affected areas of militants and other criminal elements, the Army wishes to conclude Exercise AYEM AKPATUMA earlier extended in Benue, Taraba and Kogi States on 14 May 2018”

“The Nigerian Army wishes to express its appreciation to the States government, Traditional Rulers, Religious and Youth leaders as well as other stakeholders for their cooperation and support to the Nigerian Army for the period of the exercise.”