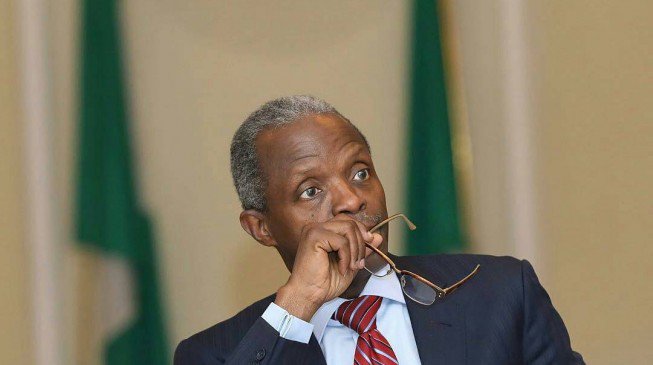 Vice President Yemi Osinbajo’s office has provided evidence of his claims that certain corrupt practices were  carried out under the  Administration of Former president Goodluck Jonathan.

The details were published last night in a reaction to the accusations by some aides of former President  Jonathan, who claimed Osinbajo made false allegations about grand corruption during the Jonathan era.

The statement by senior special assistant on media, Laolu Akande, said the Vice President did not at anytime accuse Jonathan in person, but only said the blatant corruption cases were committed during his administration.

The  statement reads , “We have read reports attributed to a media office of former President Goodluck Jonathan. It is clear from the foul language of the authors that the statement could not have come from the former President, but from the motley group of loud and rude characters whose brief seems to be to deny all and anything said against the former PDP government and to do so in the crassest possible language.

The alleged spokespersons of the former President say that facts long in the public domain, some even being used to prosecute several corruption cases are lies and that those of us in government restating these well known facts are liars.

They accused Vice President Yemi Osinbajo, SAN, of lying against the former President or his government citing their involvement in the stealing of three billion dollars, while speaking recently at The Platform event on the 1st of May.

Just for clarity, I quote the Vice President “Grand corruption remains the most enduring threat to our economy. Three Billion US dollars was stolen in what was called the strategic alliance contacts in 2013, three Nigerians were responsible, today three billion dollars is one trillion Naira and our budget is 7trillion! ….”
Two issues emerge. First, no mention is made of the former President.
Second, the story is not only true, it has been in the public domain for almost three years and it is the subject of criminal investigation and trials both here and in the UK.

The spokespersons also say that the allegations of corruption against the PDP government are mere lies. For clarity, the facts are laid out as follows:

As the Vice President said, $3B was stolen in the so- called NNPC Strategic Alliance Contracts. The three persons involved are Jide Omokore, Kola Aluko and the former Petroleum Resources Minister Diezani Alison- Maduekwe.

The companies of both Jide Omokore and Kola Aluko lifted Nigerian crude oil and kept the proceeds. The total sums converted is in excess of three billion dollars including royalties, taxes and fees unpaid for the asset from which the crude was taken. The case is the subject of a trial in Nigeria, and criminal investigation in the US and UK, and the assets of all three individuals have been forfeited in Nigeria, the US and the UK.

The criminal diversion and theft of sums in excess of $2.5 billion meant for purchase of arms to prosecute the war against Boko Haram: The first phase of the investigations revealed several sordid details, many of the assets of culprits have been seized from them and they are facing trial.

N70 billion was released in parts from the national treasury between January 8 and February 25, 2015.
In another illegal disbursement, 25th August 2014, N60B in cash in tranches of N40billion and N20billion: The sum was not tied to any project or procurement and was then shared between two security agencies under the supervision of the then NSA.

Most of these sums ended up in the hands of senior PDP members some of whom have returned parts of the loot. Some are standing trial for these offenses. These facts are in the public domain.
There was yet another set of illegal fund withdrawals under one week between January 8and 16, 2015, where the sum of N1.5 billion was released in three tranches of N300m, N400m and N800m respectively.

This money was released from the MEA Research Library Account

Another document showed that N10 billion was released to the Office of the National Security Adviser by the Central Bank of Nigeria (CBN) on September 15, 2014. The money was released in tranches of foreign exchange of $47 million, $5 million, 4 million Euros and 1.6 million Euros. A letter from the Office of the NSA in November 2014 further showed that the monies were released as ‘funds for special services’.

This particular release of N10B was sourced in November 2014 from a N40 Billion CBN released funds meant for Corporate Social Responsibility, CSR. Investigators showed that this money was released for the PDP Presidential Primaries.

Lamido Sanusi, then CBN Governor was sacked for speaking up about the over $20billion missing from oil proceeds.

These cases of grand corruption and open looting of public resources pauperized Nigeria and left us with little or no savings in the years when oil was selling at 100 to 114 dollars a barrel and we were producing 2.1 million barrels a day. When in 2015 oil prices went even as low as between 28 and 35 dollars a barrel and oil production fell to less than one million barrels a day we had no buffer, no savings, to tide us through.

The amount released from CBN in cash on a single day, ie the US$289M ( N88.1Bn) is enough to fund 244,000 N-Power graduates for a year, or pay for 1.2Billion school meals or complete half of Lagos -Ibadan or half of Abuja -Kaduna -Kano roads.

The Vice President also made the point that in 2014 with oil prices as high as 120 dollars per barrel, the total capital released for Power, Works, Housing, Defence, Transport, Agriculture and Defence were just N152Billion for the whole year.

By contrast, the Buhari administration committed N578Bn to the same Ministries in 2016 with oil prices as low as US$28 per barrel as part of the strategy to end the recession. The government was able to do more with less by stopping grand corruption and impunity.
Recently, the Minister Coordinating the economy in that administration has written a revealing book : Fighting Corruption is Dangerous: The Story Behind the Headlines. Who knows, perhaps her stories too are all lies!

Naija News recalls that the Vice President had accused the Jonathan administration of been corrupt, with the PDP challenging the vice president to reveal evidences of corruption identified by him.