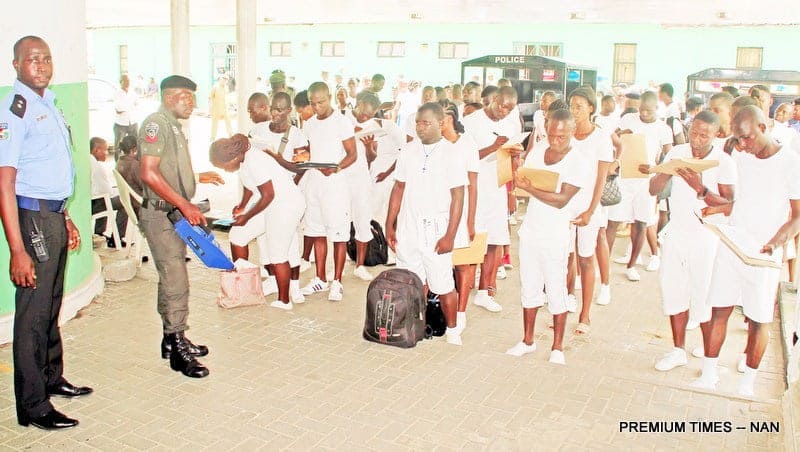 About 1,113 applicants out of 6,000 applicants who were shortlisted for the exercise nationwide are undergoing screening in Lagos State on Monday for recruitment into the Nigeria Police Force.

Report revealed that some applicants, who were oblivion of what they were expected to bring to the venue, began to purchase plastic canvass, white T-shirts and shorts when they got to the college.

The aspirant resumed the venue around 7:30 am and about 10 am, senior officer of the force taught the applicant how to fill their form.

Otoyo said: “We have started the screening. We have 1,113 applicants to be screened in Lagos and it will take one week.’’

Some, however, decried the high cost of training kits such as canvass and shirts which they bought in front of the college.

“We were not told what to bring to the venue; someone only called me requesting me to check for my name on the internet; luckily, I found my name.

“There was no instruction on what to bring apart from certificates.

“It was when we got to the Police College that we discovered that some of our colleagues were putting on white-and-white kits.

“Normally, I can’t buy plastic canvass more than N600, but because of emergency, I bought mine N1,000, while some of my colleagues bought theirs more than N1000,” one of the applicants said.

Despite the hazard associated with the job, some of the applicants express their delight in the profession.

“We know a lot of things are wrong in Nigeria and we have to put them right. Although policemen and other security agents are being killed, we must join to fight crime,’’ he said.