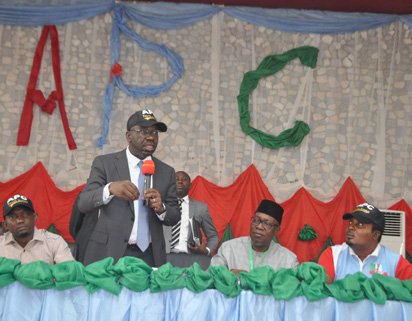 Says Youths Can Be Better Equipped Rather Than Used As Thugs

Plans to strengthen the state’s Public Works Volunteer (PUWOV) scheme has moved the Edo State Governor, Mr. Godwin Obaseki to engage 3,600 youths from the 18 local government areas of the state.

Obaseki advised the youths to position themselves well and assume their roles in the development of the sate and nation.

He gave this admonition while speaking at a one-day, well-attended Youth Entrepreneurship, Empowerment and Leadership Seminar organised by the state government in collaboration with the youth wing of the Edo State Chapter of All Progressives Congress (APC) at Uromi, Esan North-East Local Government Area.

“The youths will receive world class training on security; traffic management and other areas related to law and order,” he added.

“In the last 15 months we have employed over 45,000 Edo youths through Edo Jobs portal and we are calling on more youths to register as we have created a friendly business environment for investors to create more opportunities for the youths.”

Obaseki says his administration is aimed at training youths to be self sufficient and employers of labour rather than being used as thugs.