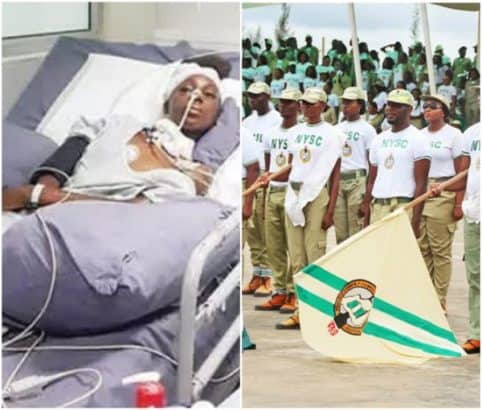 The National Youth Service Exercise, will be on hold for Adeyinka Adelekan, a 23-year-old graduate of the Ebonyi State University, who was knocked down around Skiddo bus stop, Ajah, Lagos State by a SUV.

Adelekan, who is a graduate of Geology at the university, was reported to have suffered fractures in her legs and brain injuries as a result of the crash.

The incident led to her been admitted to the Lagos University Teaching Hospital, Idi Araba, and she is yet to come out of coma since December 19, 2017, when the accident happened.

Adelekan had suffered the damage while attempting to get drinks for herself and her elder sister around 4pm on that day.

Report has it that she was planning to make a cross to the other side of the road when the SUV driven by Saviour Henry, 26, allegedly knocked her down on the median.

Henry who knocked down the victim was reported to have lost the control of his vehicle while trying to prevent a Toyota Highlander, driven by one Oluwatobiloba Olorunosebi, 19, from hitting his SUV from behind.

The police from the Langbasa division, arrested the two drivers while Adelekan was rushed to a private hospital for treatment.

She was subsequently referred to St Nicholas Hospital, Lagos Island, where she underwent a brain surgery and was placed in the Intensive Care Unit for over two months.

Further information into the incident has it that the victim was taken to LUTH when there was no improvement in her condition despite the family spending millions of naira.

The suspects, according to the police, drove without valid driving licences and were arraigned on three counts bordering on reckless driving before an Igbosere Magistrate’s Court.

The charges read in part, “That you, Oluwatobiloba Olorunosebi and Saviour Henry, on December 19, 2017, at 4.30pm at Skido bus stop, along Pump & S, Eti Osa, Lagos, in the Lagos Magisterial District, being the drivers of a Toyota Highlander with the number plate, AKD 922 EA and a Toyota RAV 4, with the number plate, KJA 582 BW, did drive the said vehicles dangerously on the highway and cause serious injuries to one Miss Adeyinka Adelekan, while the pedestrian was walking, thereby committing an offence contrary to and punishable under Section 18 of the Road Traffic Act Law of Lagos State, Nigeria, 2012.

“That you, Oluwatobiloba Olorunosebi and Saviour Henry, on the same date, time and place, in the aforesaid magisterial district, did drive the said vehicles without valid driving licences, thereby committing an offence contrary to and punishable under Section 7 (1) of the Road Traffic Act Law of Lagos State of Nigeria, 2012.”

The defendants pleaded not guilty to the charges and were granted bail by the presiding magistrate, Mrs. O. Oshin, in the sum of N250,000 with one surety each in like sum.

It was gathered that there were moves by the parties to explore settlement while the case was adjourned till June 19, 2018.