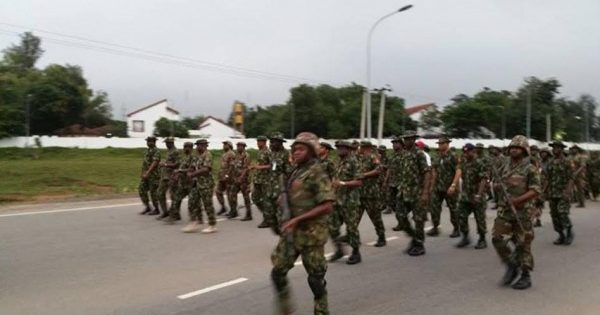 The Nigerian Army has confirmed the attack on its men by the Boko Haram insurgents even as it revealed that the outfit also killed several insurgents.

The Nigerian Army spokesman of the 7 Division says soldiers were ambushed in Mafa by Boko Haram while trying to rotate teams
A statement by Lieutenant Colonel Kingsley Samuel, a deputy director of Army public relations at the 7 Division confirmed the incident; noting that seven soldiers lost their lives while 19 were injured.

The Army said an unspecified number of Boko Haram fighters were killed after ambushing soldiers during the process of rotating troops.

“Elements of troops affected encountered the ambush while conducting routine rotation of troops last night. The gallant troops fought their way through, killing many of the terrorists.

“Unfortunately 7 soldiers paid the supreme price in the incident while 19 soldiers sustained various degree of injuries. The soldiers who sustained injuries during the fierce encounter have been evacuated and are currently receiving treatment at Military hospital in Maiduguri.

“The troops recovered an AK-47 rifle and ammunitions from the insurgents. Additional troops have been mobilised and are still on aggressive pursuit of the fleeing Boko Haram terrorists.”