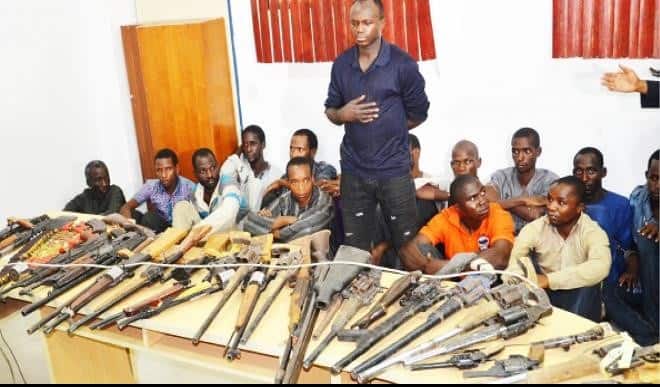 17 suspects involved in the recent killings in Kafanchan, Kaduna State have been arrested by the Nigeria Police

The violence in Kafanchan is part of the larger Southern Kaduna violence that has claimed the life of over 200 people in recent months.

The state government has had to impose 24-hour curfew on some of the affected local governments to prevent further violence.

The violence has mainly been between Fulani herdsmen and host, largely farming, communities.

The Nigeria police spokesman, Jimoh Moshood, confirmed the arrest of the 17 suspects on Thursday in Abuja when he presented the suspects before journalists.

He said that 29 assorted firearms were recovered from the suspects.

He explained that the suspects were arrested after discreet and sustained investigation by the police.

Mr. Jimoh, a chief superintendent of police, said the suspects would be charged to court on completion of investigation.

He said they would be charged for inciting public disturbance, disturbance of public peace, causing mischief by fire, culpable homicide, theft and unlawful possession of prohibited fire arms.

The spokesman said the Inspector-General of Police had assured communities in Southern Kaduna of adequate security and protection of their lives and property.

He urged them to be law abiding and cooperate with police personnel deployed in their localities.