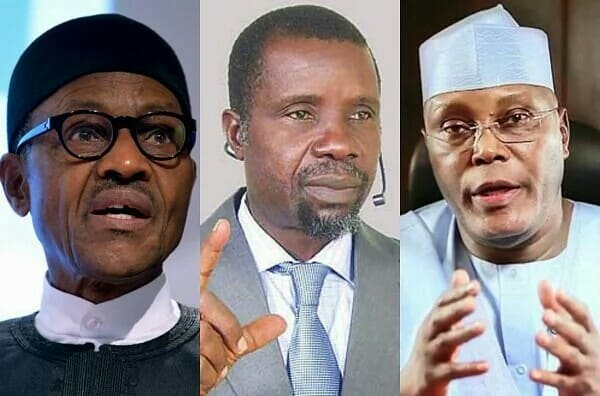 Prophet Wale Olagunju, the presiding Bishop of Divine Seed of God Chapel Ministries in Ibadan, Oyo state, has released his prophecies for 2017.

Prophet Olagunju, who accurately predicted President Muhammadu Buhari victory in the 2015 election, has revealed that the Nigerian president will be dethroned in 2019 election by former vice president Atiku Abubakar, The Sun reports.

The man of God, in a 52-point prophecy for the Year 2017 also foretold the possibility of the country splitting into five as he claimed to have foreseen, “the map of Nigeria torn into five,” saying, “no amount of peace talk can prevent Nigeria’s disintegration. It is a matter of time.”

He predicted that the Igbo’s desire for Biafra nation has received divine approval.

Below are his prophecies for Nigeria in the year:

1. As revealed by the Almighty God who will never share his glory with mortal man, the present generation of Nigerian leaders in the likes of Obasanjo, Babangida, Gowon, Danjuma, Abdusallam and Buhari will pass away before the emergence of the Messiah that will lead Nigeria to the promise land. The problem in our Nation will be so much that what we are witnessing now will be a child play to what we will see and hear and there will be chaos and distrust all over the nation as a result of which the messiah will emerge.

This messiah, an unknown person, will proffer solutions (to the problems); conduct referendum and will break Nigeria peacefully. As revealed to me further by the creator of the universe, the reign of this messiah will be brief. God of Abraham has concluded in heaven to raise for Himself the young man who will give divine solution and execute God’s programme for Nigeria.

2. There is going to be serious fight between Obasanjo and Buhari as revealed by God Almighty.

3. Notable chieftains of the APC and the PDP who are talking of 2019 without due reference to God will not live to witness that year.

4. There is going to be rowdy session in the National Assembly in the coming year.

5. The present war against Bola Tinubu will continue but many of those fighting him will come back to eat their words.

6. God again revealed to me that Nigeria is seriously sick and that the only drug that can cure her is National Repentance Prayer. Failure to do this, God says Nigeria will continue to wallow in problems. God warned Nigerians not to look up to their leaders for solutions but to God Almighty as they have none to their problems.

7. God of heaven says He is angry with President Buhari because of his failure to alleviate the sufferings of Nigerians but instead adding to it. God says Buhari’s government is like a weed on the surface of the Atlantic Ocean.

8. God says those who think the PDP is dead are making a mistake as He [God] does not work in the counsel of men but in the reasoning of His words. God says the party will bounce back and its members in the APC will return to their original house.

9. The present rumpus in the APC will continue.

10. The Nigerian nation will continue to experience hardship unless serious steps are taken to seek the face of God.

11. Nigerians should pray for Buhari against high blood pressure, liver and kidney problem as the President is sick.

12. God says that He deliberately raised Donald Trump of America to execute His judgment on America for their sin of homosexuality being propagated by Obama/Hillary Clinton. God says Trump will at a snewse behave like an anti-Christ.

13. God says the Yoruba nation will unite and rise again.

14. There is going to be sharp misunderstanding between Buhari and Osinbajo as a result of political differences.

15. God says any party that fields Buhari for the 2019 presidential election will be fielding liability as his candidacy will make the party lose the election. God says this will be so because Buhari has disappointed God by his failure to carry out His instruction as published in my 2016 predictions by national dailies to “wage war against corruption, execute God’s fierce judgment on those who sinned against God by looting as well as for his failure to demonstrate love to the poor by alleviating their suffering. God says for these reasons, He has torn his government and given it to another man after His heart to rule Nigeria. God says Buhari will continue to have problem till his last day in Aso Rock and people will continue to hate him because of his failure to rule with the fear of God.

16. To show the extent to which Buhari’s disappointment is grieving God, God says he has rejected Buhari just like He did to Jonathan and even his people the Hausas will reject him come 2019. In the presence of Almighty God as revealed to me, Buhari have become a complete disappointing king/failure just like king Saul in the bible.

17. God says the name Atiku Abubakar will continue to ring like a bell. He will be so popular among Nigerian politicians to the extent that many will root for him.

18. God says should Atiku Abubakar contest the 2019 election, he will defeat Buhari hands down.

19. The 2018 Governorship election in Ekiti state will cause a sharp division in the APC camp because of the inordinate ambition of some of their self-centred leaders. The party in the state will break into three factions as revealed to me by God.

20. God says the APC is being faced by three major problems of backbiting, unnecessary petition against former leaders and total hijack of the party structure from pioneer members.

21. Tambuwal and David Mark will be drafted to contest the 2019 Presidential election but God says the cabal of our nation will prefer Governor Tambuwal of Sokoto state.

22. Nigerians should pray against fire accident in the coming year.

23. God says that except that the Nigeria nation repent of the sin of its leaders who killed innocent souls, sin of FESTAC ’77 and sin of corruption which placed the country under the curse of the Almighty, the country’s problem will continue.

24. Prophet T. B. Joshua should pray seriously to avert sickness.

27. God says for Buhari to have taken the problem of Nigeria to Kaaba in Mecca as if there is no God in Nigeria and rather than motivate the entire nation to fast and seek the face of God, He [God] will continue to raise adversaries against his government and Nigerians will continue to hate him.

28. God again warned that should the APC field Buhari in 2019, the broom will be broken and thrown into fire just like I predicted to PDP in 2014.

29. God Almighty says President Buhari is too rigid and stubborn. God says the President has set aside His mandate for him to cleanse the nation of corruption. God says He is only giving the President the grace to motivate Nigerians for special repentance prayer.

30. Serving ministers in Buhari’s government should watch their steps as the President is set to drop some of them and reshuffle his government.

31. God says Governor Aregbesola of Osun state will continue to swim in problems until he gets out of office as a result of the recognition he gave to the Osun Osogbo idol.

32. God says he will inflict those who loot Nigeria treasury with sickness. They will henceforth be inflicted with dreaded sicknesses that will lead to untimely death unless they repent.

33. God says Goodluck Jonathan will never win any election again in Nigeria as a result of his sin against the Almighty.

35. The executive and the National Assembly will go on a serious collision course in the coming year. Buhari should be careful lest he is accused of non-implementation of budget.

36. Nigerians should pray for Awujale of Ijebu land.

37. Those who say the Biafra nation will not materialise are dreaming for the Igbos have taken their case to the creator of the universe and He has granted their heart desire.

38. PDP will bounce back to become a formidable party in Oyo state again.

39. Buhari should watch his steps to avoid impeachment.

40. As revealed by God, should Buhari fail to take it easy with the people of the South-South and South-East and go ahead to use military power, Nigeria may go to civil war.

41. As revealed by God, a new generation of military officers will in future overthrow the government of Nigeria to clear the rot perpetrated by reckless politicians.

42. Before 2019, there will be amalgamation of political heavyweight and political party that will give the APC sleepless nights.

43. The on-going war against corruption will soon lose value as the President will bend the rules and soft pedal because of inordinate and self-interest.

44. A prominent artiste will fall sick in the coming year.

45. Nigerians should pray for Baba Sala.

46. Come 2019 general election, PDP will fight the APC to a standstill.

47. APC should forget about winning 2019 election for another government will emerge that will probe their government.

48. Lagos State Governor, Akinwunmi Ambode should be prayerful to avoid being at loggerhead with the elite. He should also pray to avert sickness.

49. Another strong party will emerge before the 2019 election.

50. God Almighty who revealed to me in my 2015/2016 prediction that Buhari is not the Messiah says the promised Messiah will use his mandate to settle all problems confronting Nigeria. The said Messiah will conduct a referendum so as to peacefully break Nigeria without civil war.

51. God says three out of the four pillars that are holding the APC have broken down as a result of their greed, inordinate ambition, stubbornness, favouritism, tribal and religious sentiment and therefore their days in government are numbered.

52. God revealed to me and I saw the map of Nigeria torn into five, by this no amount of peace talk can prevent Nigeria’s disintegration. It is a matter of time.