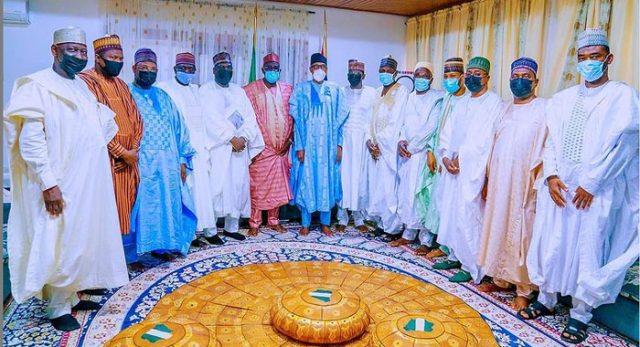 Governors of the All Progressives Congress (APC) on Sunday night held a closed-door meeting in Abuja to discuss party issues.

The meeting which is believed to be connected with how the party intends to organize a rancour-free National Convention and zone its presidential ticket held at the Kebbi Governor’s Lodge in Abuja.

Naija News gathered the meeting was presided over by the chairman of the Progressives Governors’ Forum and Kebbi State Governor, Abubakar Bagudu.

It was further gathered that the Governors used the opportunity of the meeting to discuss the legal cases instituted by members against the party at all levels and agree on a date for the APC National Convention.

It would be recalled that while some party stalwarts prefer the APC convention proposed to hold in February 2022 should be postponed, others are of the view that the convention should go ahead as planned.

The Governors of Katsina, Aminu Masari; Kano, Dr Abdullahi Ganduje; and Gombe, Muhammad Yahaya were yet to arrive as at press time and had no representative in the meeting as well.