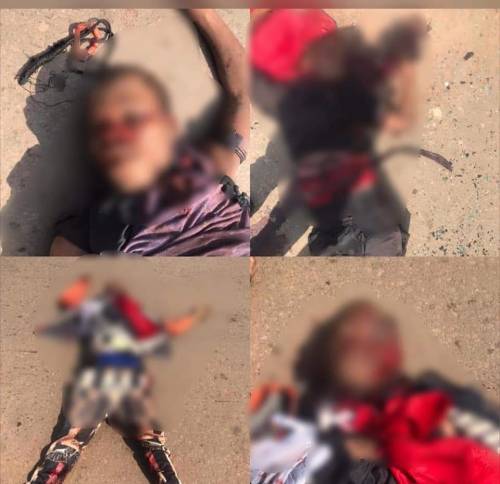 The Nigerian Army has revealed that they have killed gunmen who murdered two operatives of the Department of State Service in Anambra on Friday, October 29.

Brig Gen Onyeama Nwachukwu, the army public relations officer revealed the elimination of the assailants on Saturday in a statement.

It will be recalled that unknown gunmen killed two security operatives during an attack on their convoy in Anambra State.

He said: “The soldiers made contact with the fleeing gunmen, engaged them and killed four. A number of weapons and items were recovered.

“These include two AK-47 Rifles, one GALIL Ace 5.56 x 45 Iwi Gun, one Avofeng Handheld radio and one Black Highlander jeep.”

The gunmen attacked the security officers along Nnewi-Nnobi road firing bullets at them and their vehicles which resulted in the death of two officers.

Nwachukwu berated the Indigenous People of Biafra and its Eastern Security Network for trying to ruin the upcoming Anambra elections.

In other news, the Chairman of the Economic and Financial Crimes Commission (EFCC), Abdulrasheed Bawa, says the agency has no hand in the raid on Mary Odili’s house, disclosing that the Commission laughed over such report.

Security operatives had on Friday conducted a search on the Abuja home of Mary Odili, who is a Justice of the Supreme Court. She is the wife of a former governor of Rivers State, Peter Odili, who is currently on the watchlist of the EFCC.

Speaking during an interview on Channels Television, Bawa said “mischief makers” want to put the EFCC at loggerheads with the judiciary.

He said linking the raid to the EFCC is an attempt to fracture the relationship between the commission and the judiciary — its “biggest partner”, stating that they find this laughable.

“I think they are just mischief makers trying to link anything to the EFCC of this nature. We were never there, none of our operatives was there. It’s not from EFCC, it’s not an EFCC thing.

“And I’ve called all the non-security and re-enforcement agencies in the country and they also denied that anybody has been sent to the house to carry out any search or arrest.