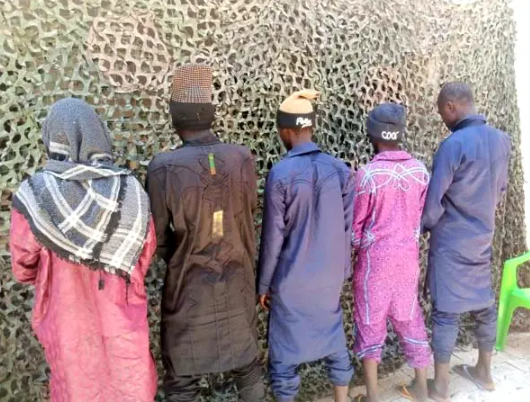 Some repentant Boko Haram terrorists have asked their defiant colleagues to stop killing Nigerians and come out of the forests.

The surrendered insurgents urged their colleagues who are yet to surrender to the military to do so, stressing that surrendering is the best thing to do.

The repentant insurgents stated these on Tuesday during a media tour to one of the holding and screening facilities for the surrendered terrorists in Borno State.

Speaking to reporters, the surrendered criminals said they regret taking up arms against the country, attacking villages and destroying properties in the North East.

One of the repentant fighters said he and other surrendered colleagues realized that their commanders lied to them on why they were recruited.

The repentant insurgent stated that he had spent about six years fighting the war but later realized that they were not fighting any just cause.

He said that they would have surrendered a long time ago but for fear of being captured and killed by the military.

“We were afraid that we would be killed if we come out but it is not so because we were received without attacking us and we are also being treated humanely since we came out.

“I want to urge my colleagues who are still in the bush to come out and surrender because they will be accepted,” he said.

The Commander, 21 Special Armoured Brigade Bama, Brig.-Gen. Adewale Adekeye said that thousands of Boko Haram fighters, their families, and supporters had been received since July.

Adekeye said the theatre command was aware of the fears and apprehension that the recent event had generated among the civilian populace in Borno and the nation at large.

He said the surrendering events had been taking place within Bama Local Government Area of Borno given its large size and proximity to Sambisa Forest.

“The number of insurgents that have surrendered is quite large but, however, most of them have been processed and moved down to the holding facility organized by Borno State Government in Maiduguri.

“But we are the first point of call for these insurgents coming down from the bush and therefore, many responsibilities are bestowed on us being the first contact to profiling them,” he said.