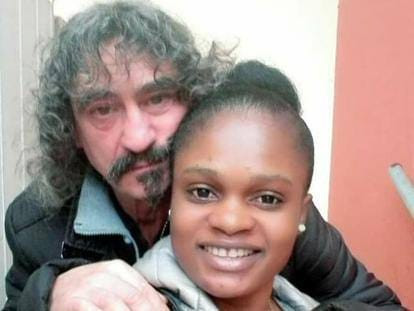 The federal government has demanded the Italian government take action after one of its citizens murdered his Nigerian wife.

The Chairperson of the Nigerians in Diaspora Commission (NIDCOM), Abike Dabiri-Erewa on Sunday condemned the act, describing it as unfortunate and sad.

She called on the government of Italy to ensure justice is served on the matter.

Naija News recalls a 31-year-old Nigerian woman has been murdered by her Italian husband after she asked for a divorce.

The woman, Amenze Rita was shot in the parking lot of the company, Mf Mushroom where she works.

The unfortunate event happened in the presence of her colleagues on Friday, September 10 at 7:30 am where the soon-to-be divorced husband, Pierangelo Pellizzar awaited her arrival and shot her four times.

The deceased’s 61-year-old alleged killer had driven off in a grey Cherokee after committing the crime. The car was later found abandoned in his brother’s house.

It is reported that Amenze had being killed by her husband because she had filed for divorce after she returned from Nigeria. She had arrived from Libya to Italy in 2017 and had gotten married to her husband in 2018.

Giving an update on the matter, Dabiri-Erewa on Sunday said Pellizzar has been arrested by the Italian Police.

Similarly, the Nigerian Ambassador to Italy, Mfawa Omini Abam; as well as the President of the National Union of Nigerian Associations in Italy (NUNAI), Mr Rowland Ndukuba, while condemning the killing, appreciated the Italian Police for action taken so far and urged that full investigation be carried out on the matter and the killer faces the consequences of his action.