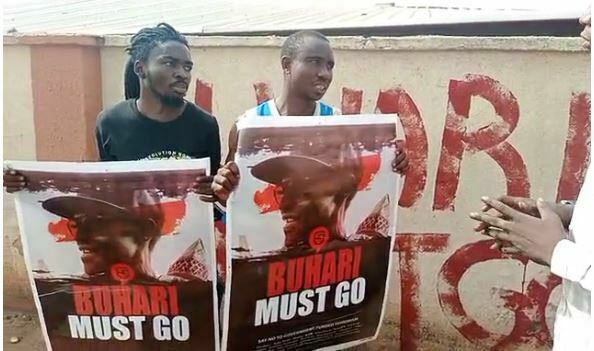 The trial of five ‘Buhari Must Go’ protesters, was on Monday, stalled before the Wuse Zone 2 Magistrate Court in Abuja due to the absence of the prosecution counsel in the case.

The trial magistrate, Mohammed Zubairu, seemed unperturbed at the absence of the Department of State Services’ counsel, refusing to strike out the charge against the protesters but granting the spy agency the grace of month to appear in court.

The five ‘Buhari Must Go’ protesters who are standing trial in the case are Ben Manasseh, Anene Udoka, Henry Nwodo, Samuel Larry and Samuel Gabriel (a blind saxophonist).

They were arraigned on July 28 on charges of disturbance of peace.

The prosecution counsel, led by I. Onotu (Esq) had alleged that the defendants sought to incite citizens against the government.

The trial was scheduled for the commencement of a hearing in the case.

However, the proceedings could not go on as counsel prosecuting the protesters on behalf of the DSS did not show up.

Mr. Tope Temokun, who led the defence team, prayed the court to adopt its “no case” submission.

In his ruling, Magistrate Zubairu said there could be a justification for the absence of the prosecution counsel, hence adjourned the case to September 20, 2021 to “see if they will come”.