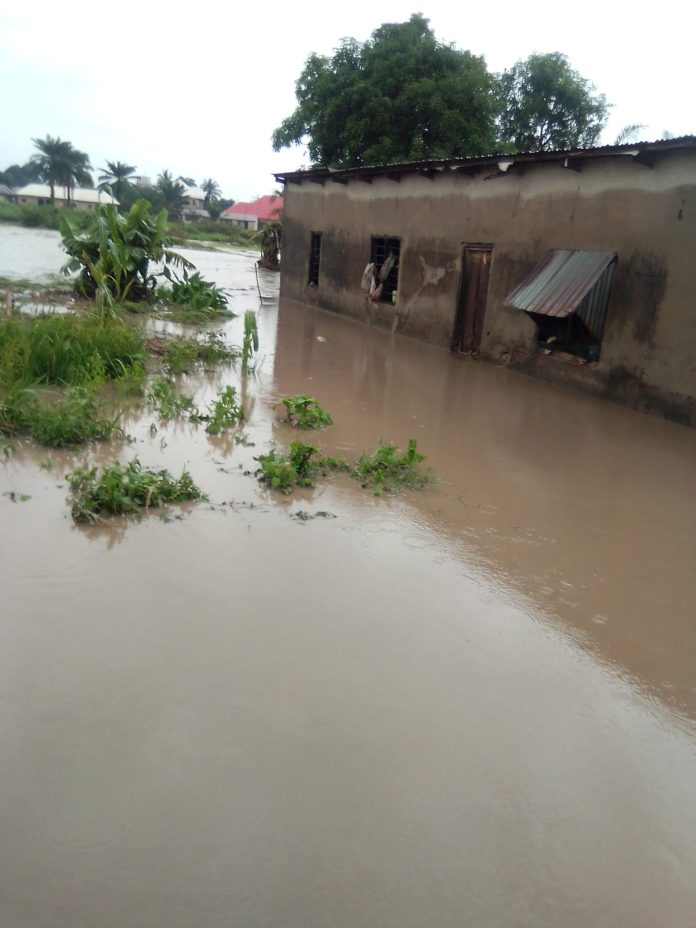 No fewer than 2,000 residents of Makurdi have been rendered homeless following a heavy downpour in parts of the Benue State capital which started around 1am on Monday and poured heavily for over six hours.

Reports have it that over one thousand five hundred houses including shops, motor parks and business premises with many farmlands washed away.

Naija News gathered that the torrential rain which was accompanied by heavy wind affected many parts of the Makurdi metropolis and caused damage to several buildings, property and farmlands in the state capital.

This development has raised concern among informed residents of the Benue capital as they worry that there is likely going to be a spike in the number of cholera cases at a time doctors in public hospitals are on strike.

Cholera is a water-borne disease characterised by sudden onset of profuse watery diarrhoea, which can lead to sudden death as a result of dehydration, if not managed on time. This shows that the disease thrives when there is flooding.

“In Idyer village around Zone 4 police Headquarters, Makurdi the heavy downpour started about 12.45 am. The settlement is heavily flooded. Water has submerged the major drainage and homes flooded. The rain is still falling and I cannot drive out,” said a resident, who gave his name as Wantu.

On his part, a resident of Achusa, Orkase Martin said the rain started at about 1am accompanied by severe winds which wreaked havoc by blowing off rooftops of many households in his area.

Lamenting the situation, Odue Thomas, who lives in Naka Road, said, “The situation in my area is quite pathetic. We have now become internally displaced persons. Even infants and toddlers are not spared as houses were submerged with properties worth millions of naira destroyed”.

For a distressed John Ugede, “no life was lost but our livelihood and property have been damaged. The rains have continued nonstop for over 12 hours now. After surviving this, I pray we survive the health implications of this flooding. Cholera has been killing people in Benue and then this?

“The worst part is that doctors are on strike. If there is an outbreak of the dreaded disease now, where do we run to? The government and charity organisations should please come to our aide. Those affected are trying to stay afloat without caring about the aftermath of this flooding”.

Also speaking from the town, Ejembi Paul, harped on the need for residents of Makurdi to be careful of the water they drink or use for cooking, stressing that the stretch of the city affected by the latest flooding incident raises fears about a spike in cases of cholera. “Even in this difficult time, people must observe personal hygiene and ensure that they treat or boil the water they drink. Government must increase its enlightenment efforts at this time”.

Benue is among the 22 states in the country where the National Centre for Disease Control has confirmed 311 cases of cholera with 816 deaths between the 1st of January and 1st of August 2021. People usually come down with the disease when their sources of water for domestic use is contaminated by the waste deposits and microorganisms carried by flooding or increased rainfall.