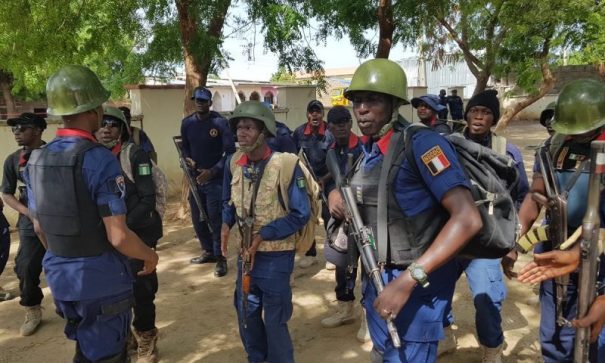 In a bid to help security agencies in their fight against insecurity, the Emir of Kazaure in Jigawa State, Alhaji Najib Hussaini-Adamu has donated torchlights and motorcycles to the Nigeria Security and Civil Defence (NCSDC).

The items were received by the Corps Area Commander in charge of the Area C Command, Mr Bishir Magaji, on Tuesday in Kazaure.

The development was confirmed to NAN on Wednesday by the spokesman of the Corps, CSC Adamu Shehu.

He said the motorcycles and rechargeable torchlight were donated to the Area Command and four divisional offices of the Corps in the area.

“In an effort to support the NSCDC Command towards ensuring effective security, the Emir of Kazaure, Alhaji Najib Hussaini-Adamu, has denoted five new motorcycles and 25 rechargeable torchlights to the Kazaure Area Command and four Divisional Offices of the Corps in the emirate.

“The items were received by the Area Commander in charge of Area C, Mr Bishir Magaji, on behalf of the State Commandant, Mustapha Talba on Tuesday,” Shehu said.

Meanwhile, Adamawa hunters stationed at a checkpoint in Ganye town have turned back a group of 107 Fulani migrating to Toungo Local Government Area of Adamawa State.

Naija News understands that the hunters had intercepted a trailer conveying families comprising five men, 32 women, and 70 children in the early hours of Monday.

The men, who identified themselves as heads of the families, claimed to be migrating from Doma in Nassarawa State to Toungo to settle with permission from the district head of Toungo, Alhaji Hammangabdo.