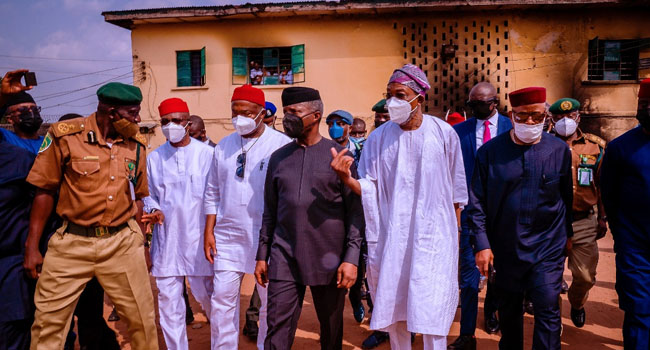 The Vice President of Nigeria, Professor Yemi Osinbajo has noted that some elements who he described as agents of anarchy are responsible for various attacks and criminal activities in Nigeria.

The spokesperson of the Vice President, Laolu Akande in a statement on Wednesday, quoted Osinbajo to have made the submission during his visit to Imo State on Tuesday.

Osinbajo warned that these elements of anarchy interested in causing problems in Nigeria must be resisted by citizens and residents alike.

He also condemned the attack on the Police Headquarters in Imo State and the Owerri Correctional Centre in its totality.

“We must, therefore, reject the agents of anarchy that are seeking to weaponize the frustration and discontent of our young people for their own profit,” Osinbajo said.

Adding that: “The path of violence can only lead to a disaster that consumes everyone and leads to the desolation of our communities. It is easy to take peace for granted, but we need not learn the value of peace through the horrible crucible of war.”

“When you attack police stations and free dangerous criminals, you put men, women, children and their possessions and livelihoods at risk.”

“Whatever the motives of the perpetrators, this action is egregious and atrocious in the extreme, and all men and women of goodwill must openly condemn this assault on the way of life of the good people of the state.”

Though he admitted that no country, including Nigeria, has a perfect system, Osinbajo called for a peaceful approach in addressing all grievances.

“Our system is not perfect – no earthly system is.” “Democracy provides channels for seeking redress for injury, for peacefully addressing the problems that ail us.”

“And I call on all of us to come together to resist any attempt to turn the progress and peace that this zone is set to experience to conflict and disruption,” he added.

He assured the Imo State government under the leadership of Governor Hope Uzodinma of the federal government’s support in tackling its security challneges.

“The Federal Government stands with you and the great people of Imo State at this crucial time,” he assured the governor.

Meanwhile, Mohammed Adamu, on Wednesday handed over to Usman Alkali Baba as the Acting Inspector General of Police.

Naija News learnt that Adamu handed over to Baba at the Force Headquarters in Abuja.

Earlier, Vice President Yemi Osinbajo had decorated Usman Alkali Baba with his new rank as the Inspector-General of Police.

The decoration was done at the Aso Rock Presidential Villa in Abuja, Naija News understands.