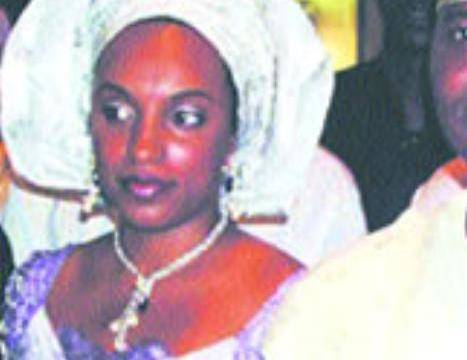 The daughter of the late President Umaru Musa Yar’adua, and wife of former Kebbi State Governor, Sa’idu Dakingari, Zainab, has been sued over allegations of N2 billion land fraud which involves her firm and another firm, ITBAN Global Resources Limited.

According to SaharaReporters, Zainab would appear before the court as a defendant in the land fraud.

It was claimed that she fraudulently took over 1.5hectares of land in the Kado area belonging to the ITBAN firm and erected buildings on the site.

Zainab and her firm were also accused of forging ITBAN papers to perpetuate the fraud a matter which is already taken to the FCT High Court for determination.

He said, “Hajia Zainab was said to have used her own company, Marumza Estate Development, and purposely forged the said documents and in return started construction at a site in Abuja belonging to the ITBAN firm.”

“Although a meeting to reconcile both parties led by Senator Adamu Aleiro held at the house of the former FCT Minister in Maitama, Abuja, it ended in a deadlock as the offer presented did not suit owners of the ITBAN firm.”

“The firm has filed a lawsuit against Marumza Estate Development owned by Hajia Zainab Dakingari at the Federal High Court of Justice, Maitama, Abuja. The court has already served court notice to parties involved, i.e. Marumza Estate Development Company Ltd., owned by Hajia Zainabu Umar Yar’adua, the Minister of the Federal Capital Territory, and the Federal Capital Development Agency, Sani Rabo, who served as a witness and master minder behind all the fraudulent activities involving Marumza Company and the Abuja Geographic Information Systems. The case hearing is said to be on Monday, May 17.”

“Also, Hajia Zainab’s firm – Marumza Development Company Limited – was registered on July 15, 2009, with two minors (underaged) as directors; viz Umar Ibrahim, who was then seven years of age and Maryam Sa’idu who was just below one year. This, to say the least, the company started on a wrong foot of fraud.”

The court papers partly read, “Endorsements to be made on the writ before issue: The claimant’s claim is for; one, the sum of N500,000,000 (Five Hundred Million Naira) against the 1st and 2nd defendants as general damages for trespass on the 1st claimant’s land being and situate at Plot 506, Zone B09, Kado District, Federal Capital Territory, Abuja.”

“Two, AN ORDER of Perpetual Injunction restraining the 1st and 2nd Defendants whether acting by themselves or through their agents, privies or any person howsoever described from entering or further entering to carry out any further acts of construction or to exercise any acts of possession on the 1st claimant’s land being and situate at Plot 506, Zone B09, Kado District, Federal Capital Territory, Abuja.”

“Three, AN ORDER of Perpetual Injunction restraining the 3rd and 4th defendants from recognizing the 1st and 2nd defendants in any manner whatsoever as to the legal titleholder of Plot 506, Zone B09, Kado District, Federal Capital Territory, Abuja.”

“Four, AN ORDER of this Honourable Court mandating the 3rd and 4th defendants to rectify the records of the Abuja Geographic Information Systems to reflect the name of the 1st defendant as the legal titleholder of Plot 506, Zone B09, Kado District, Federal Capital Territory, Abuja.”