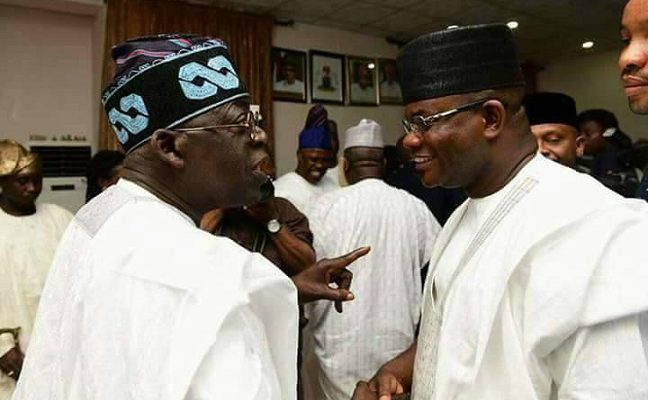 Controversial governor of Kogi State, Yahaya Bello has said the National leader of the All Progressives Congress (APC), Bola Tinubu, knows his limitations in Nigerian politics.

Speaking in an interview with the BBC Pidgin on Monday, Bello described Tinubu as a kingmaker and leader that will support a youthful politician to become president in 2023.

He added that the former Lagos governor is a smart and revered statesman who has brought up a lot of leaders in the country, adding that Tinubu would support his presidential ambition to succeed President Muhammadu Buhari.

The governor added that the APC leader would rather advocate for the younger generation to take over the leadership of the country rather than the older generation to continue to be in power.

Bello, however, went philosophical when asked who will make a better president between him and Tinubu in the 2023 presidential election.

“Our national leader, Tinubu, is a revered statesman, well-respected by all, including me. I know that he is a smart mentor. He has brought up a lot of leaders in this country. He’s a wonderful kingmaker. And I know surely that he wants this country to be on auto-cruise very soon. He knows his qualities and limitations. He knows who will be able to drive this country to a successful future. He will part of those that will make a better and youthful president for this country. I believe in his judgement,” he said.

“What is happening now is so amazing. Nigerian youths, women and Nigerians across boards are calling on me to run for president in 2023. It is something I have been making consultations on. It will interest you to know that not one kobo I have given to anybody to print posters or to do anything. Youths across boards felt it is time for the younger generation to take the seat of a driver to fix Nigeria.

“So, if young Nigerians are asking me to fix this country, they have the right to make such demands. I’m pretty sure if this unity among younger Nigerians continues this way till 2023, nobody aside from God almighty will stop the youths from taking over the leadership of this country. By then, I can tell you that the journey of fixing this country has just begun.”

Although Tinubu and Bello have not declared their intention to run for president, it is rumoured that the two APC stalwarts are believed to be interested in the leading the country in 2023.