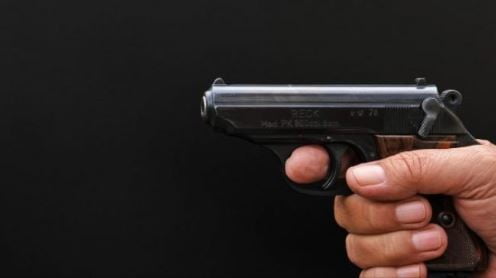 The horrible death of a young lady identified as Chinwendu has left residents of Umuokirie village in the Okuku community of the Owerri West Local Government Area of Imo State in great panic.

Reports reaching Naija News at this time revealed that the lady was killed by her manfriend whose name is revealed as Chidube Onyema.

The suspect was said to have attacked his girlfriend and shot her dead over suspicion that she was cheating on him. Confirming the incident to newsmen, a source in the community said the victim had visited her manfriend from her village, Ohabele in the Obosima community, Ohaji/Egbema Local Government Area of the state, after returning from Aba, Abia State.

He disclosed that trouble started after Chinwendu just some hours to make a trip back to Aba picked up a phone call before her lover. The suspect reportedly demanded that she hand over the phone to him after the call but that she declined.

Onyema got furious with the development and rushed into his room to bring out a gun and allegedly shot her on her private parts.

"The girl visited Chidube from her village in Ohaji/Egbema on Sunday evening. She was supposed to return to Aba that evening. Trouble started after the girl finished answering a phone call and the guy demanded to know who called her," the anonymous source told reporters.

He added: "When the lady couldn't give a convincing explanation, he demanded her phone but the girl refused. The man pulled out his gun and demanded the phone, but the lady refused. They started dragging the phone and unfortunately, the trigger pulled and the bullet pierced through the lady's private parts.

"She became unconscious as villagers gathered. She was rushed to the Federal Medical Centre, Owerri, where she died three hours later."

Naija News learnt that the suspect was a hunter and that allowed him to own a gun in his house. Further revelations had it that the victim's brothers came from Obosima on reprisal on Monday and allegedly burnt the suspect parents' house.

Reacting to the incident, the President-General, Okuku Autonomous Community, Martin Daniel, when contacted told reporters that the community was working with the police to restore peace. He stated that the suspect was arrested on Sunday and his gun was recovered and taken to Umugumma Divisional Police Headquarters.

Daniel added that the suspect and the matter had been transferred to the State Criminal and Investigation Department in Owerri. He said the community contacted the police, who extinguished the fire razing the family house of the suspect.

On his part, when contacted, the police spokesman in the state, Orlando Ikeokwu, said the suspect had been arrested and the case transferred to the state CID in Owerri.

Meanwhile, a man identified as Hassan Saka has been arrested for being in possession of two human heads in Ondo State.
It was gathered that the suspect was apprehended by operatives of the National Drug Law Enforcement Agency (NDLEA) in the state.