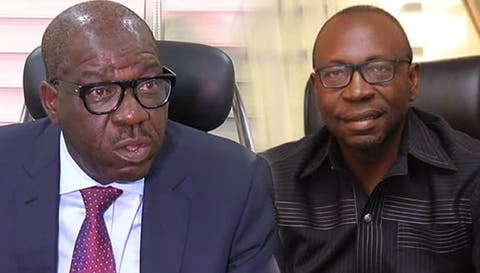 The All Progressives Congress (APC) has closed its case of alleged certificate forgery levelled against Governor Godwin Obaseki of Edo State.

At the resumed hearing of the suit on Monday before a Federal High Court sitting in Abuja, the plaintiff’s counsel, Akin Olujimi, concluded their case with the cross-examination of an expert witness, Raphael Onwuzuligbo, a retired Assistant Superintendent of Police and a forensic document examiner.

In his testimony during cross-examination by counsels to Obaseki and the Peoples Democratic Party (PDP), the witness said the University of Ibadan (UI) logo on the governor’s certificate appears to have been compromised.

He also insisted that the signature of the Vice-Chancellor of the university was missing from the certificate not because the document was poorly scanned but that it was actually missing.

Lawyer to the All Progressives Congress (APC), Olujimi said that the testimony of the witness further proved their case against Obaseki as Justice Ahmed Mohammed adjourned further hearing till January 5, to enable the governor and the PDP open their defence.

2023: Tinubu Has Right To Contest For President – Osoba