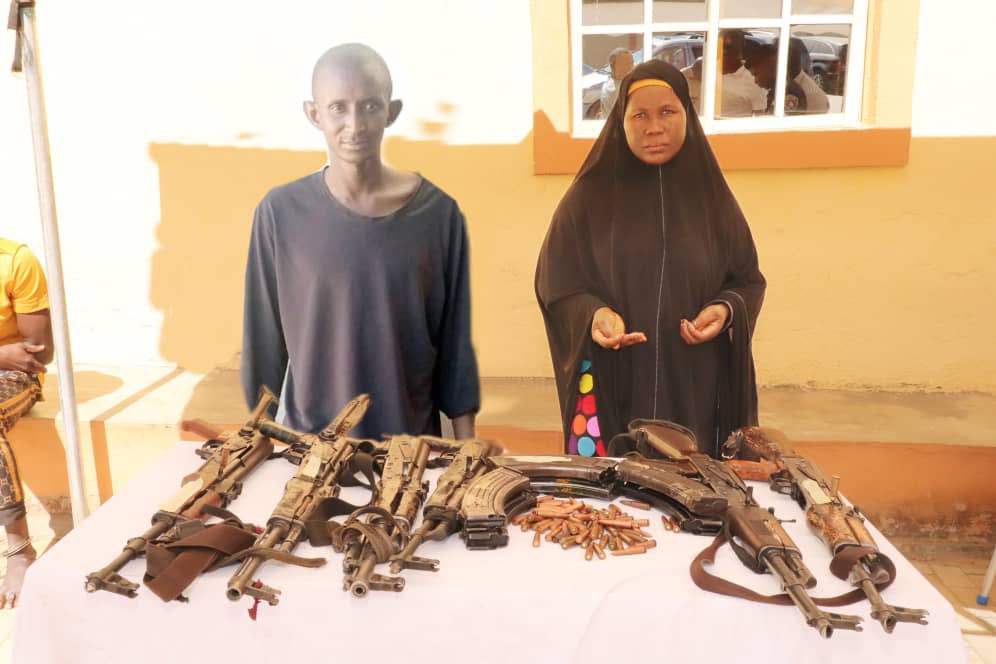 The Nigeria Police Force on Wednesday denied sharing photoshopped images of suspects after Nigerians called out the force based on observations of a certain image shared on their social media handle.

Nigerians had accused the Police Force of sharing photoshopped images on December 1 after certain discrepancies were observed and called out the security operatives.

In its explanation on December 2, the Police acknowledged the pictures used were taken separately but merged to explain the story of the suspects.

Naija News understands the case involves a 40-year old female suspect, Talatu Ibrahim accused of gun-running and another person identified as Duleji Alhaji Abubakar who uses the guns from her to carry out criminal activities including kidnapping and armed robbery.

Below is the Police statement explaining why the images appeared the way they are.

“The attention of @PoliceNG has been drawn to comments in the social media erroneously suggesting that the photos of the suspects shared on the Police handles on 1st December, 2020 were falsified.”

“The Force wishes to state categorically that there was absolutely no misrepresentation or any intention whatsoever to deceive members of the public.”

“To set the record straight, in the case involving one Talatu Ibrahim, female, 40years old from Shinkafi LGA, Zamfara State from whom six (6) AK49 rifles were recovered and one other, Duleji Alhaji Abubakar a.k.a Ori jeje who gets arms supply from her to carry out series of kidnapping and armed robbery in Kwara State, the pictures are authentic and true representation of the suspects and exhibits.”

“However, the pictures were taken separately and merged into one screen for seamless understanding of the story line. The arms showcased in the picture were the exhibits recovered by Police operatives from the suspects.”

PHOTOS OF SUSPECTS SHARED ON NPF OFFICIAL HANDLES NOT FALSIFIED

The attention of @PoliceNG has been drawn to comments in the social media erroneously suggesting that the photos of the suspects shared on the Police handles on 1st December, 2020 were falsified. pic.twitter.com/MBGdkSqSHH