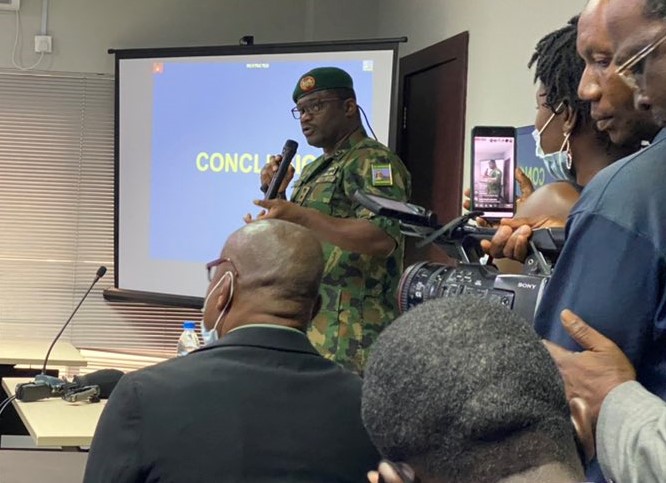 The Nigerian Army has reportedly promoted Brigadier General Ibrahim Taiwo, the officer representing the army at the panel the Lagos state government set up to probe the Lekki shooting, to a Major-General.

Military sources told The Cable that Taiwo was elevated to the rank of a major-general after the military board approved the promotion of senior officers.

Naija News recalls that following the curfew imposed on Lagos state by the government, soldiers invaded a peaceful protest at Lekki toll gate on Tuesday evening, October 20, killing #EndSARS protesters in the process.

But the army who initially denied involvement in the Lekki shootings, later disclosed that its officers were invited by the Lagos State Governor, Babajide Sanwo-Olu, to enforce a curfew imposed on the state.

Following the protest and the shooting, Sanwo-Olu set up the judicial panel to look into allegations of rights abuses by the police special anti-robbery squad (SARS).

The Lagos government also empowered the panel to investigate what transpired at the Lekki tollgate shooting.

Making defence for the soldiers’ action at the panel is Taiwo, commander of the army 81 division intelligence brigade.

While appearing before the panel, General Taiwo argued that the soldiers didn’t have the intention to disperse the protesters but were on patrol to clear up the Lekki, Eti-Osa corridor.

According to him, the soldiers were attacked by hoodlums, and this necessitated the use of force.

He had earlier claimed soldiers were armed with only blank bullets which was fired into the crowd but made a u-turn in the panel’s next sitting, admitting that soldiers were also armed with live bullets for protection.