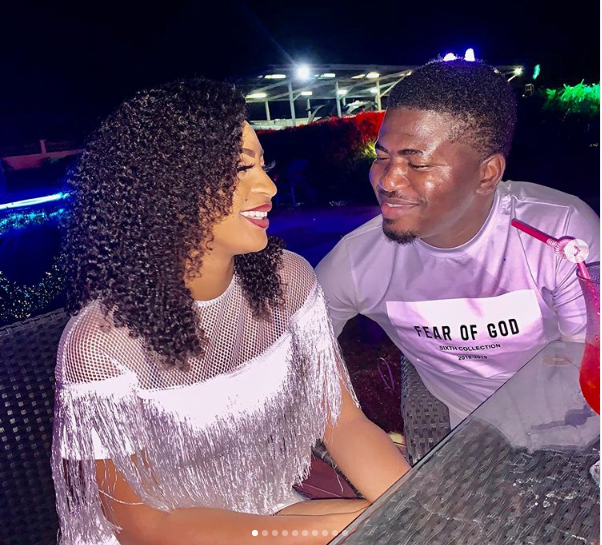 The fiance to the beautiful lady was reportedly crushed to death by a truck in the Ajah area of Lagos State has taken to the social media to express sadness over the demise of his to-be-wife.

The young man who is identified as Loveday Etomi on Thursday, August 13, a few moments after the horrible incident took to his Instagram page to mourn the sudden death of his fiance, Immaculate Okochu.

Naija News had reported that the incident was brought to the public domain by the deceased’s elder sister, Magdalene Okochu who shared her condolence message on her Facebook account on Thursday.

It was reported that Okochu immediately died at the scene of the accident, due to the horrifying thrust by the said truck. Narrating the sad story, Etomi disclosed that he was in traffic when he received a distress call that his fiance was involved in an accident.

According to him, he hurriedly parked his car and ran on foot to the scene to find her already ‘cold’.

Naija News gathered that Okochu who was before her death a store manager at the Cold Stone Creamery Nigeria in Apapa was rushing to her working place when the incident happened.

The decease reportedly took a bike to escape the Lagos traffic but unfortunately, “a truck rammed into the bike she was on, crushing her on Badore Road in Ajah around 11 am on Wednesday, August 12,” Etomi revealed.

According to reports by some friends of the deceased, “she was first taken to a hospital in the area, and from there, she was referred to the General Hospital, Marina, where she was declared dead.”

Mourning and recalling the beautiful moments shared together, Etomi noted on his social media account that ‘no one could ever replace her.”

“My world has been crushed. You left me with no word. This is not the plan. Next month is our wedding. How can you just leave. Your car will arrive next week. Why can’t you wait to enjoy this life with me. Your God couldn’t saved you I have always doubt the existence of God but he couldn’t save you,” Etomi wrote.

He added; “How can you leave me. Baby I just drop you off. This is not the plan. Ahhh I don’t know if I will survive this pains it’s too much for me. If money could bring you back I Will give up everything. Life was meaningless until you come into my life. How can you go Emife. Come let’s gist ahhhh who did this to me.

See below Etomi’s posts while expressing his sadness on the social media;

Where do I even start from. Yesterday August 12th is a day I will never forget. The most precious woman in my life left me. A woman I cherish so much decide to leave me in this world. How can you leave when we have few weeks to our wedding ? How can you leave when your car will arrive next week? How can you leave mr Charles and I. I loved you with everything I have. I promise you everything you have ever wished for I will make sure you have it. Oh Emife you broke my heart into pieces. Wednesday morning when you were about to leave for work I said baby you look so beautiful are you sure you are going to work you laughed and I smiled as well. I decide to take you to bus stop as usual. You even buy me egg rolls for me and my friend. And told me you will come home by 5pm so you can cook Cos you haven’t cook for a while Cos of work. I never knew you were saying goodbye to me I couldn’t notice it Ahh .You are the only woman that has ever cook for me. You brought love and happiness into my life and replace it with this pain. How can you do this to someone you love. Oh Emife you are too good, everyone loved you they cared about you how could you? My mother hasn’t been herself. Every one are going through pains Cos of you. I have been searching for you at home I check all the whole rooms I couldn’t find you. I screamed your name, no answer. How can I survive this wicked world without you? I warned you about Cold stone, they are blood suckers they don’t care about you . All the care is their money. I asked to resigned you said baby wait you will at the right time. Every day cold stone keep stressing your life. I keep telling you don’t let cold stone kill you for me. Oh they finally kill you for me. They achieved their wishes. They made you go through pains until you die. They use you. They have your pictures of you on their Advert yet they won’t pay you. They made you suffer until you die. You complained of mr Dapo every day problem.I hope he’s happy now that you are no more . Baby guess what? Cold stone still continue with work. Someone has already replaced you. What I told you and warned you about has come to reality. Baby how can I recover from this? 💔💔💔💔😭😭😭😭

The life is meaningless until you make my life meaningful how can you leave like that? The drinks for your bride price is ready. Oh baby we are supposed to go shopping tomorrow for our wedding. I tried to saved you but I was too late. I was told you had an accident I was on my way. There was traffic I drop from the car and start running looking for you so I can take you to hospital, I ran and ran until I saw you oh baby you were gone. I cried I screamed, called your name in the middle of the road I was mad, you couldn’t say baby I am okay. 😭😭😭 I beg you to wake up let’s talk you refused. I hold yours hands they were cold. Getting to Mortuary I was told to remove your previous ring, I said baby they asked me to remove the engagement ring you love so much, you couldn’t say a word. Your body was cold I said baby do you wanna take shower you couldn’t answer, I hug you, I kissed you yet you couldn’t even respond to me. How can you do this ? The pain is too much. If money could bring you back I will give up everything on my name. My heart hurts so badly. Where are you? Come to me. I will always visit your grave. I will bring you flower. If you ever get a chance to appear to me. I will be waiting. Your pictures on the wall will remain there. I love you baby. I can’t even stop crying. How can you do this to me? This is very hard for me @coldstonecreamery_nigeria you killed my wife. You stressed her until she die. @coldstonecreamery_nigeria no single humanity in you all. They use their workers until they die or they sack them. It will never be well with you people for taking Emife way from me. @coldstonecreamery_nigeria you made my life miserable. All my dream is destroyed by @coldstonecreamery_nigeria 😭😭😭😭💔💔💔💔💔 baby where are you ahhh

Meanwhile, a 57-year-old Indian man who reportedly lost his dear wife to a ghastly car accident has commissioned a lifelike wax statue to keep her memory alive, Naija News reports.