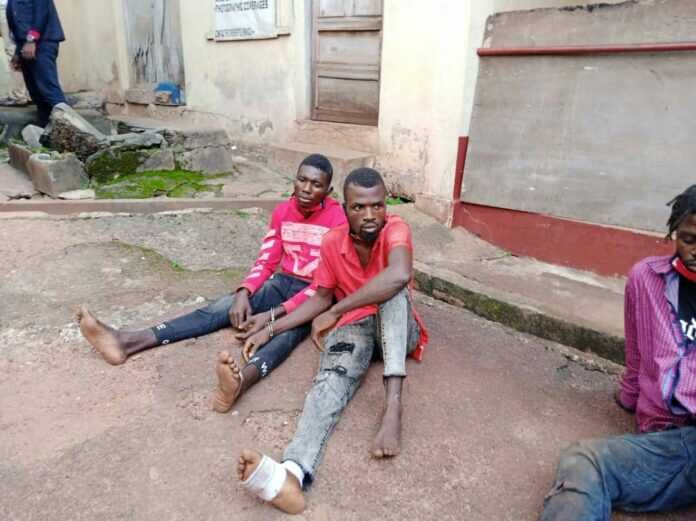 Enugu State Command of the Nigeria Police Force (NPF), has confirmed the arrest of one Ifesinachi Nwankwo for allegedly responsible for the killing of an Assistant Superintendant of Police.

Naija News learned that the culprit who was formerly a Nigerian Army was dismissed from the service following a continuous attack on his base by the Boko Haram insurgents in the year 2018.

Confirming the report, Enugu State Commissioner of Police, Abdurahman Mohammed, told reporters that Nwankwo, 24, had joined the Nigerian Army in 2017 and served in Damboa, Maiduguri. He noted that the young man, however, fled from his camp after frustration from insurgent attacks.

Mohammed revealed further that the ex-soldier who has now joined a robbery gang in the state was apprehended alongside one of his gang members, Raphael Nworie, 27. According to the CP, the two among others were confirmed to be responsible for the death of Ominyi Chukwu, an Assistant Superintendant of Police whom they killed during an attack on Ozalla Division of the command at Agro-Allied Product Filling station along Obe/Agbani Road, Nkanu West LGA of Enugu State.

“the armed robbery suspects also carted away two assault rifles and injured a police inspector, Princewill Ebiriem, after the attack. The suspects also attacked and killed the Chief Security Officer of Amodu-Awkunanaw Community, Mr Onyebuchi Aninwagu, on 19th July 2020 and made away with his pump-action gun,” Mohammed was quoted saying.

Items recovered from the duo include; 6 firearms including an AK 47 rifle, 15 ammunition, 36 live cartridges, 1 TV set, 1 mobile phone, and 1 cutlass, Naija News understands. The police noted that the arrested suspects would be charged to court once investigations have been concluded.

Meanwhile, a woman arrested in Osun State for allegedly breaching the Coronavirus protocols, Tolulope Olagunju, reportedly slumps while standing trial before the Magistrates’ Court in Osogbo.