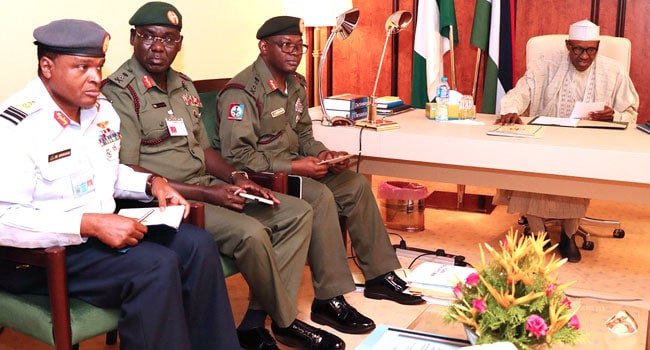 A security expert, Chigozie Ubani, has berated President Muhammadu Buhari over his refusal to sack service chiefs amid the rising insecurity in Nigeria.

Naija News reports that Ubani, who is a security consultant and fellow, Institute of Security, Nigeria, said the resurgence in banditry in the North, the other insecurity issues in the country and President Buhari’s refusal to sack service chiefs is suspicious.

The security expert ho made this comment in an interview with PUNCH, said: “Until we get to the root of the banditry, we will not know exactly why, because none of us is part of the system or their ideology. However, we can adduce some explanations, based on patterns, happenings and the directions they have taken. I have always asked; who is their sponsor?

“The Office of the National Security Adviser is supposed to have done its job; do the intelligence work and submit the report to the President, but for the President to make the statement he made recently, succinctly, that the best of the service chiefs is not good enough shows that he has intelligence and probably would have directed them on what to do but that their efforts at achieving those directives are not yielding the desired results. It could also mean that the intelligence report might be faulty, but the President himself has failed the nation in one major way.”

Ubani continued that: “The service chiefs have overstayed their welcome. National security is not a private business, where you are the Chief Executive Officer and the Managing Director at the same time for as long as you live, whether the company is making profit or not. The security of lives and property is the primary reason why Mr President, Major Gen Muhammadu Buhari (retd.), was elected into office. He upheld it by drawing a three-point agenda. When you talk about revamping the economy, you do that to sustain the citizens, which boils down to security.

“When you say you want to fight corruption, the end result is security, because if people loot without repercussion, the system could collapse and that would create anarchy. So, in this regard, he has failed. He has kept these men (service chiefs) for too long as if there is something else behind it. I also feel we need to find out the agenda of certain groups that make up the Nigerian nation. Until we dig into that and find out what some ethnic nationalities in Nigeria want, we may not be able to effectively deal with these situations. For example, if you are in a contest as a politician, the goal is to win the election, but from what we have seen, hiring thugs to attack the opponent has become part of the process. Don’t forget, the goal was not to sustain criminality. But when you win an election and get into office, those criminals are not going into government house with you.

“They would then sit down on their own criminal enterprise, leaving you with serious security challenges to contend with. Therefore, we have to trace the root cause of all these challenges. When we arrest these elements like we have seen, what information do we extract from them and why are we not dealing with them as criminals that they are, whether they were hired as mercenaries or they were the masterminds. Why are we not trying to find out the big shots who live in Chad and Niger but come in here as Nigerians? Who are they? In fact, my question is this; what is the agenda of the Kanuri man in Nigeria? I see a Kanuri agenda in the whole of this challenge.”

On what he thinks on the argument that the removal of the service chiefs may not be the solution to the security challenges in Nigeria, Ubani said: “We cannot make that assumption until we experience it. Whoever tells us that it will not be the ultimate solution should tell us if they have tried it before.

“Thousands of people have died, and hundreds of thousands of people, if not millions, have been displaced; what is the big deal in taking the risk to remove about four men? The refusal to do this doesn’t add up. Anybody with that line of argument is part of this agenda I’m talking about or is completely ignorant of what the situation is. If the President removes them, he should simply let those who would take over know that those before them were removed because they failed. It makes a difference if he tells them that.”