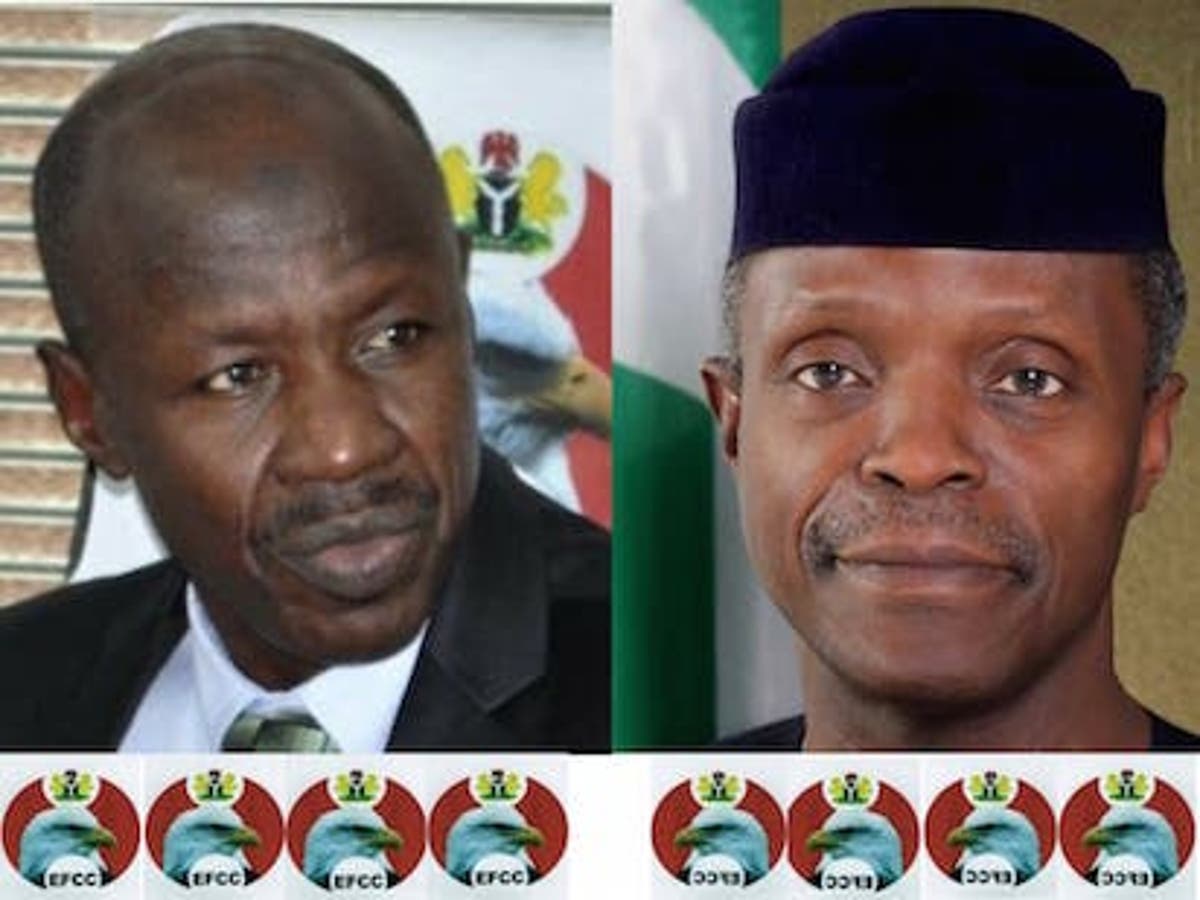 Naija News reports that Jackson Ude, a former director of strategy and communications under President Goodluck Jonathan administration, through his news medium, “PointBlank News“, published that the embattled Magu embezzled over N39 billion and gave Osinbajo N4 billion for a soft landing.

The report quoted sources within the panel investigating the suspended EFCC Chairman to have “exposed the vice president’s involvement in the scandal.”

“Specifically, Magu was said to have mentioned a N4 billion that he released to the VP based on directives the very day the president left the country for the United Kingdom on medical treatment,” part of the report read but did not give details of which of the president’s numerous medical trips to the United Kingdom it referred to and provided no evidence to back the claim.

However, a report monitored on The Nation newspaper by Naija News, says  Magu denied giving N4billion to Vice President Osinbajo. The report says sources quoted Magu as saying: “I did not tell the panel that I gave the Vice President N4 billion. Where will I get such money? Do I have access to such funds? It is part of mudslinging. Please clear this. I do not have any control of such cash, I did not order the transfer of N4 billion to the VP or to anybody.

“The name of the Vice President never came up at the panel’s session at all. Since the VP was not an issue, I could not have mentioned that I gave him N4 billion.”

Meanwhile, Magu’s reaction is coming after Osinbajo had on Thursday asked the Inspector-General of Police to investigate malicious tweets on the alleged N4billion given to him by Magu. The Vice President made the demand in a July 9 petition to the IG, signed by his lawyers, Prof. Taiwo Osipitan and Abimbola Kayode.

The petition reads: “The above referred malicious tweets and publications were made on a public platform on a Twitter account with over forty-six thousand followers, some of whom have re-tweeted same hundreds of times, as at the time of writing this petition. In addition, the false allegations have elicited responses targeted at the vice president ranging from shock, outrage, to comments that cast aspersion on the integrity of the Vice President.

”The tweets and reactions thereto have also been circulated widely on other social media platforms including Facebook and WhatsApp, as well as other online websites including Newsreel with the caption “EFCC PROBE VP Osinbajo Allegedly Indicted Over N4billion Recovered Loot Diversion” available at https://newsreel.com.ng/2020/07/08/efcc-probe-vp-osinbajo-allegedly-indicted-over-n4billion-recovered-Ioot-diversion/; and YouTube at https://www.Youtube.com/watch?v

”Our instruction is that the above statements published by Mr. Jackson Ude are false in every material respect and same are designed to injure the reputation of our Client. Copies of the publications are hereby attached for ease of reference and necessary investigation.

”These vicious and malicious publications are meant to achieve one objective only, to represent to his readership and others (Nigerians and Foreigners) that our Client is a dishonest and disloyal public officer and consequently unfit for the position of Vice President of the Federal Republic of Nigeria which he is occupying.

”We are of the view that unless an action for criminal defamation is commenced against the said Mr. Jackson Ude, he will continue to use his social media platform to publish materials that are false and criminally defamatory of our Client’s reputation.

”In view of the above, we humbly request that you cause the above allegations, made against our Client, to be investigated and if the suggested investigation confirms our complaint of the falsehood of these allegations, to initiate criminal proceedings pursuant to the provisions of Sections 391 — 395 of the Penal Code Act for Criminal Defamation against the said Jackson Ude.”