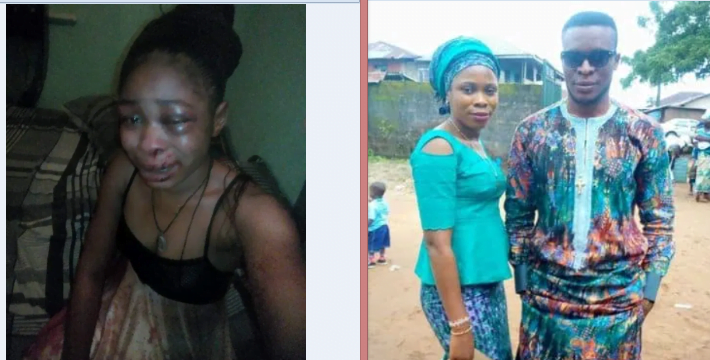 A 35-year-old man has reportedly tortured his wife after she shunned his request to abort her three-month pregnancy.

According to reports, the woman had severally complained to her relatives before the recent incident that her husband has been maltreating her since their marriage in 2018.

Naija News learnt that Bebu Abiodun Abbey who is allegedly found to have been engaged in domestic violence beat his wife during the last weekend, attempted to forcefully abort the pregnancy.

Reporting the incident, Jimmy Adekanle, a brother to the victim, Ronke Adeyemi revealed that the family had been informed of his violent acts on his wife.

He noted that the Ronke had to be hospitalized after her husband beat her up for refusing to get rid of the pregnancy she had for him.

The incident which happened in their apartment at Ode-Irele, Ondo State left the woman with bruises all over her body due to the extreme beating she received.

“Our sister had been complaining to us for a long time about how her husband had been maltreating her over every single issue since they got married,” said Adekanle while reacting to the incident.

“We always settle issues for them because there is no perfect marriage but her sin this time around was her refusal to abort her three-month-old pregnancy which she had for him. The husband wants her to terminate the pregnancy and since she refused, he went ahead to beat her up and left injuries all over her face and body.”

In another development, Naija News reported that a woman presented casket as a gift to her husband to mark Father’s Day.