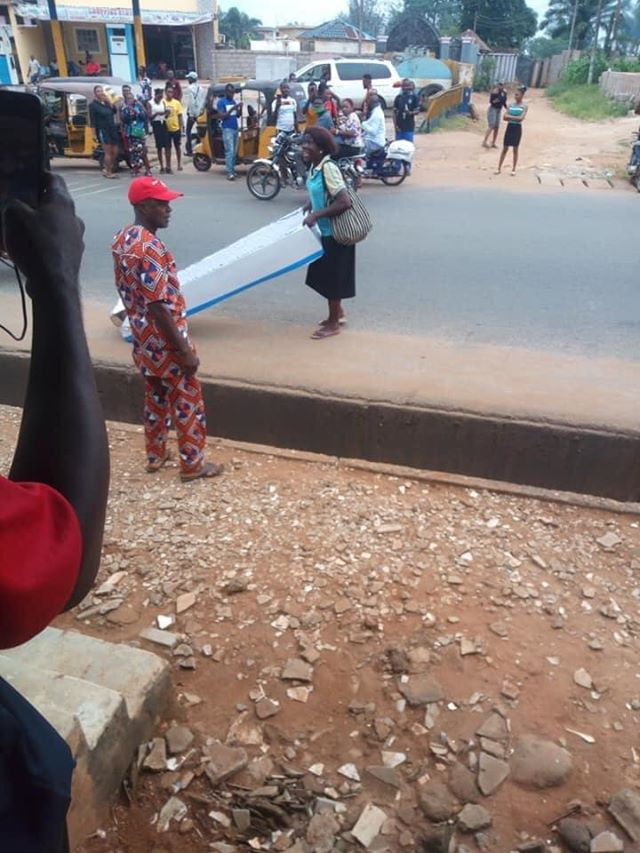 Father’s day celebration turned out dramatic at Oko, a community in the Orumba North Local Government Area of Anambra State after a woman presented her husband an unimaginable gift.

According to the report, a man was presented a casket by his wife to mark the day which was celebrated across the nation to commemorate those in the fatherhood.

Residents in the community were left mouth opened yesterday after the woman reportedly returned home with a casket she had purchased a few days earlier, kept with the seller pending the fathers’ day celebration.

A source revealed that the woman came home a few moments after Sunday church service in a shuttle with the casket which she had kept secretly for days, and handed it to her husband after settling the shuttle driver.

“We were surprised when she came in with the coffin. Nobody could understand her,” said the family source.

“She is not normal,” said another family member.

“She has been crying for help, but unfortunately Nigeria and its leaders have not built mental health centres in our hospitals to address these issues,” he alleged.

However, contrary to the report, another anonymous who claimed to have known much about the occurrence shared on the internet that the woman had lost her husband a few days ago, shut him in the house and proceed to buy a coffin for his burial.

He said, “This woman here lost her husband, she locked up the corpse of her husband and went and bought coffin.”

“It happened a few days ago. The family rejected the coffin and asked her to return it back to the seller for she is not the one to buy a coffin for her husband, it is not done,” he added.

Meanwhile, Naija News reported earlier that a woman has delivered a baby reportedly a twin of the same baby she birthed ten years back.

According to the report, the wonder twin’s mother had delivered the first child in 2010 following her quest to conceive after five years of barrenness.