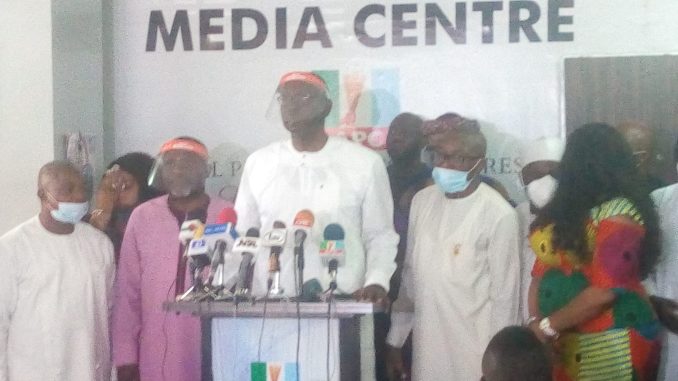 All is now set for Pastor Osagie Ize-Iyamu, the former governorship candidate of the Peoples Democratic Party (PDP) in the Edo 2016 election, to emerge the candidate of the All Progressives Congress (APC).

Osaro Obazee, who contested a state assembly seat in 2019, and Pius Odubu, a former deputy governor of the state, have reportedly stepped down and endorsed Ize-Iyamu, The Cable reports.

Ize-Iyamu is believed to have the backing of the suspended National Chairman of the APC, Adams Oshiomhole.

Naija News recalls that the APC had disqualified three aspirants from the six that indicted interest in contesting in the June 22 governorship primary.

Recall that Obaseki had dumped the APC after meeting with President Muhammadu Buhari and his Chief of Staff, Professor Ibrahim Gambari, at the Presidential Villa.

The Edo State Governor had met with Governors Nyesom Wike of Rivers State and Udom Emmanuel Udom of Akwa Ibom.

Obaseki also held a strategic meeting with the National Chairman of the PDP, Uche Secondus and the Sokoto State Governor, Aminu Tambuwal.

Following the various meetings, the PDP on Thursday announced it was postponing the Edo State governorship primaries.