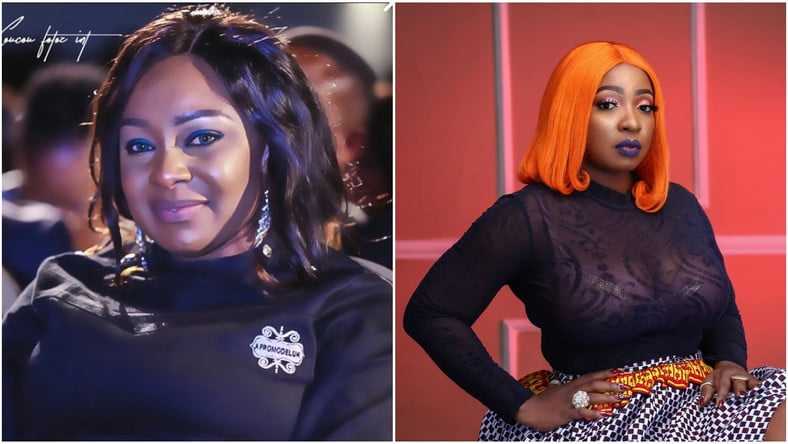 The perspective of several Nigerian into the mode and type of rape has been on the front burner on many media platform for the past four weeks as the cases of rape increases in the country.

One of those who had spoken on the deadly act is Anita Joseph a  Nollywood actress who spoke about marital rape, implying that it is not possible for a husband to rape his wife.

The 32-year-old had on Saturday shared a video with husband, MC Fish, in which they talked about a friend of Anita’s who had opened up to her about her husband forcing himself on her.

Anita said, “Someone told me something she said her husband raped her, she said, Anita what do I do? should I go to the police? Which one be say your husband rape you? Are you mad?…”

Am talking about married people Watch this Video to the End before you beat me oh ☺️? @realmcfish ❤️?? Stop Arguing in my Comment section go and order your waist Cincher from @hourglassfashionworld we move ??????????

Meanwhile , A fellow Nigerian Actress   Victoria Inyama has faulted statement made by Anita Joseph that their husbands raped them when they weren’t in the mood for sex.

Victoria Inyama, upon seeing the video strongly disagreed with Anita’s statement. She revealed that there is something called marital rape. She argued that forcefully having sex with a spouse is another act of domestic violence.

Victoria Inyama said: “Can a husband rape? Yes a husband can rape his spouse. It depends. Let me define it. Marital rape or spousal rape is the act of sexual intercourse with ones spouse without the spouse’s consent. The lack of consent is essential here because it does not need to involve physical violence. Marital rape is a form of domestic violence and sexual abuse.

“Husbands can rape wife. I do not know about wife raping a husband. The most important thing is consent is needed. A lot of women constantly raped in their marriage. They are so ashamed to even talk about it. I have experienced it and I am learning about it. The trauma and the damage it causes is beyond your understanding.”

here is  her video below

Marital Rape is a form of Domestic violence & sexual Abuse, historically sex within marriage was regarded as a right of the spouses,But engaging in the act without the spouse's consent & then Penetrating in now widely classified as Rape! Marital Rape is more widely experienced by women than men. Cultural practices, Religion & societal ideologies contribute to its acceptance. Circumstances do vary but Because it's a Norm Doesn't Make It Right! ⁉️⁉️ #notorapeofanykind⛔#notodomesticviolence? #notospeakingoutstigma?❤?? #noshame??????