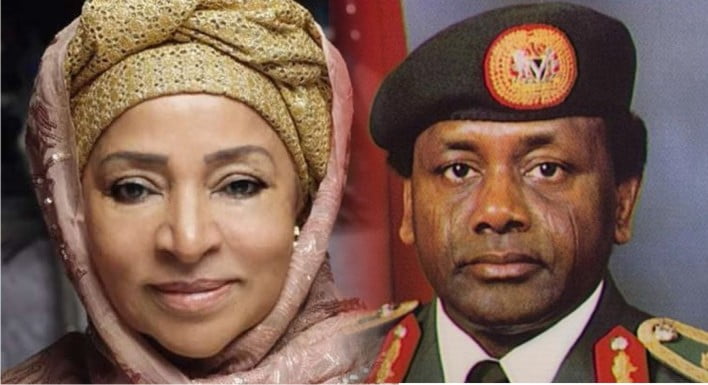 Maryam Abacha, wife of the late Nigerian military head of state, Sani Abacha has suggested that the government is not saying the whole truth about huge sums of money said to have been looted by her husband during his regime.

She made the disclosure in a recent interview to mark the 22nd anniversary of her husband’s death.

According to Maryam, her husband made huge contributions to the development of Nigeria during his lifetime. She further questioned why those labelling her husband as a looter and corrupt leader had to wait until his death before speaking out.

She lamented that the truth will soon be revealed and all those responsible for peddling wrong news about her husband will ‘kneel down.’

“How come this man was not a thief until he died?” she said in her interview with Kano Focus.

“If he had done wrong, God knows. If other people are putting the wrong on him, it is a matter of time.

She further disclosed that the late Abacha helped many persons during his lifetime but many of those he helped don’t even want to associate with him or the family again.

“He worked in Kano and he planted Kano people, but there are people he helped a lot but they are not even greeting me now for no reason,” she continued.

“They just hate us. But why? It is Haram and Allah is watching us.”

Naija News recalls Sani Abacha was Nigeria’s military president between November 1993 and June 1998. He died in office at the presidential villa in Abuja on June 8, 1998.

Since his death, several sums of money in different batches allegedly looted and stored outside the country by the late leader have been recovered by subsequent administrations in the country.

Between 1998 and 2020, looted funds now commonly referred to as “Abacha Loot” estimated at $3.624 billion have been recovered.

Naija News recalls the Federal Government of Nigeria under the leadership of President Muhammadu Buhari on Monday, May 4 received the three-hundred-and-twelve-million dollars ($312m) Abacha loot from the United States.

Meanwhile, Hamza Al-Mustapha, the Chief Security Officer to former Nigerian military leader, Sani Abacha has also hailed the impact of his former boss on Nigeria noting that he should be celebrated as a hero and not condemned as a villain.