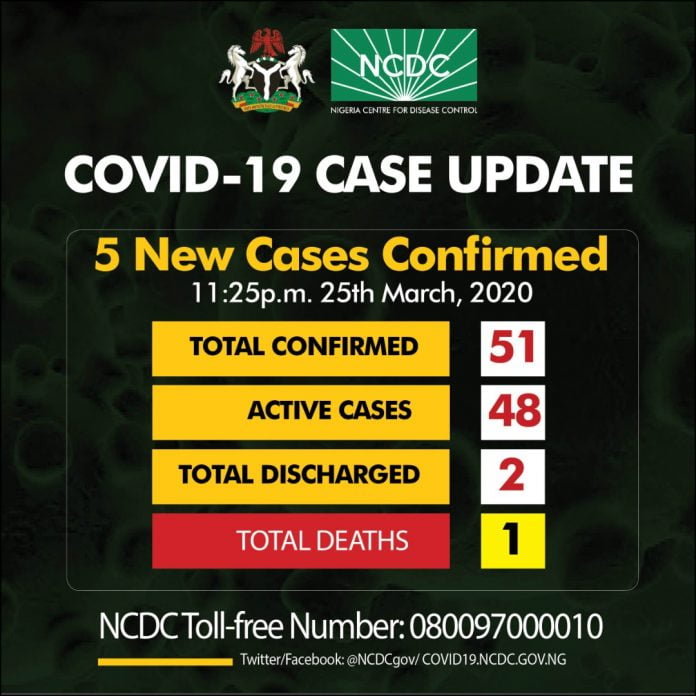 Five new cases of the Covid-19 Pandemic have been recorded in Nigeria with oil-rich Rivers State scoring its first casualty. There are now 51 confirmed cases of the deadly virus in the country.

The NCDC further explained that three of the infected persons are returning travellers into Nigeria while the other two are close contacts of a previously confirmed case.

This comes as states across the country are scaling up efforts to combat the spread of the virus.

Residents have been asked to stay at home, stricter restrictions have been placed on public gatherings and people including governors and top officials are being forced to self-isolate.

Among those who are self-isolating is Vice President Yemi Osinbajo after the Chief of Staff to the President, Mr Abba Kyari, tested positive for the coronavirus.

This was disclosed in a tweet by his aide, Laolu Akande, who stated that his boss had been working from home. Mr Akande disclosed on Wednesday morning that Professor Osinbajo tested negative for the virus.

VP Osinbajo yesterday at the office conducted his meetings via video conferencing, while observing social distancing. Today, he continues his work from the home office, as he is in self-isolation in accordance with NCDC protocols. Photo: Tolani Alli pic.twitter.com/dRYqlTL8cc

Also on Wednesday, the presidency announced that President Muhammadu Buhari had tested negative for the virus.

As contact tracing and tests continue to be carried out daily, there are fears that the healthcare system in the country and on the continent (Africa) could become overwhelmed with cases.

The battle by the NCDC and relevant agencies to battle the pandemic received a boost earlier on Wednesday as Nigeria received its share of materials donated by philanthropist and Chinese business tycoon, Jack Ma.