A twitter user identified as Sadiq Suleiman has caused a barrage of reaction after taking to his social media page, twitter to be precise to apologise to the candidate of the Peoples Democratic Party in the 2019 Presidential election, Atiku Abubakar.

Sadiq took to his twitter handle to apologise to the former vice president for ignorantly voting him out in the presidential race.

Naija News understands that Atiku Abubakar lost in the February 23rd Presidential election against his top contender and candidate of the All Progressive Congress, President Muhammadu Buhari.

Sadiq in his submission noted that he had voted for President Buhari due to the kind of love he has for him then. Admitting now that he has realised his mistakes, and seek God’s forgiveness and forgiveness of Atiku. 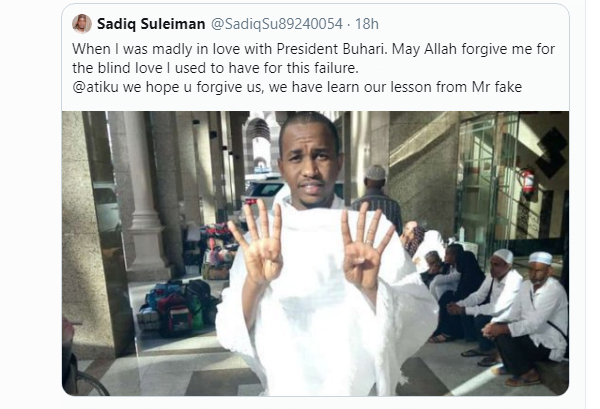 Reacting to Sadiq’s post, some social user commented that it is already too late for Sadiq to have asked for forgiveness.

Some opined that God will never answer his prayer of forgiveness, stating that Atiku whom he now preferred is never a saint than Buhari.

See their reactions below; 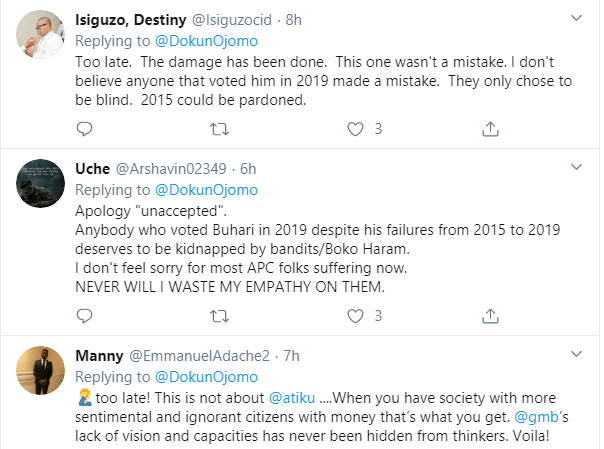 Meanwhile, Naija News had reported that the Special Adviser to President Muhammadu Buhari on media and publicity, Femi Adesina has maintained that the President still enjoys massive followership and support from the people of Borno State.