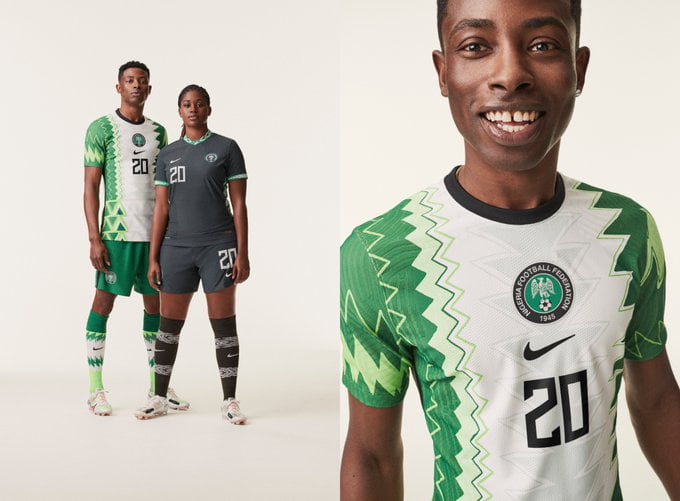 Moments after new Super Eagles football kits were unveiled, a barrage of reactions has been witnessed on social media as many Nigerians express their opinion on the new development.

Naija News had reported earlier that the 2020 Nigeria kits were on Wednesday unveiled by Nike, the kits were named Swoosh. Nike also released designs for the United States and South Korea.

The new kit will be worn by the Super Eagles for the 2021 Africa Cup of Nations qualifiers and 2022 World Cup.

It could be recalled that the President of the Nigeria Football Federation, Amaju Pinnick, revealed last week that the proposed new Super Eagles kits will get people to queue when it is launched. Adding that the new design is far more classic than the previous one.

However, Nigerians have raised suggestions on social media that since the Federal Government has been encouraging its citizens to patronize homemade products, it can also boost their morale by showing a lead role in patronising Nigerian Fashion makers for the Eagles kits.

This media platform, however, understands that the International sport kits makers, Nike, has been the company behind all Super Eagles kits, among other International Teams and Clubs.

Suggestion by Nigerians pointed out that there are good Fashion Designers in the country that can make good kits for the Super Eagles.

That it will be a thing of pride to have the Nigerian National Team kits made within the country, adding that the home designers will have more of the African creative mindset to come up with a good design.

In another news, Naija News had reported that Super Eagles head coach, Gernot Rohr, has revealed that he met with Manchester United striker, Odion Ighalo, to convince him to return to the national team following his recent move to the Old Trafford.

Ighalo who was recently signed by the Red Devils retired from the national team immediately after the 2019 Africa Cup of Nations in Egypt.