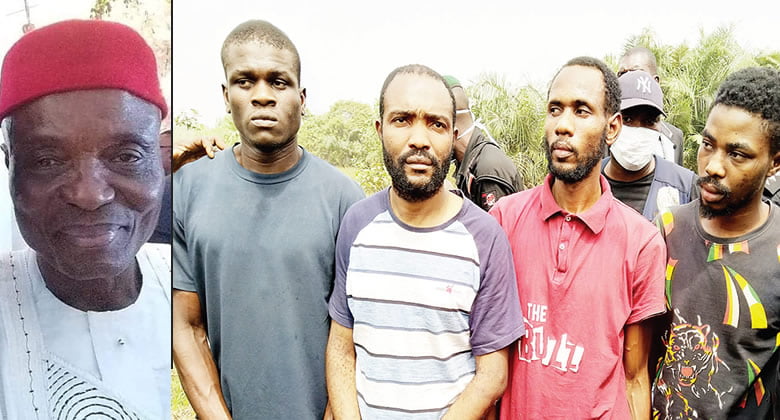 The dismembered body of a businessman, identified as Ignatius Adunukwe, has been recovered in the bush in Ajah area of Lagos State.

A further report revealed the deceased was about to sell a landed property to some supposed buyers who kidnapped him.

It was gathered that the victim and the supposed buyers had agreed on a date and location to meet to seal the deal but the suspects took advantage of the meeting and kidnapped the billionaire.

It was revealed that the suspects forced the billionaire to sign the agreement for the transaction after which he was injected with a lethal substance.

The suspects thereafter dismembered the body of the businessman and packed it into a bag and dumped it in a bush.

A lawyer identified as Smart Law while speaking on the incident noted that efforts by the deceased’s personal lawyer to accompany him to the meeting point proved abortive.

He noted that when the deceased went missing the case was reported to the police and investigation was carried out.

Read the post of Smart Law on Instablog9ja, “How the billionaire owner of Fireman Generator was murdered and his body stacked inside a bag.”

“Chief Ignatius Odunukwe, who went missing since the first week of December 2019, has been found dead.”

“The story had it that the billionaire was killed by his assailants, cut into pieces and his body packed into a Ghana-must-go bag, took to the expressway and dumped inside a forest. The sum of N900m and original documents collected from him.”

“Some criminals, who pretended to be land buyers, drew his attention requesting to purchase property since he had one for sale. The deal was concluded and having agreed on the purchase price, the agreement was drafted by his lawyer.”

“Both parties agreed to meet on an agreed date and place for the exchange of money and signing of documents, that’s when the whole drama unfolded. Chief Odunukwe’s lawyers suggested going with him for the perfection of the deal, but he declined on the ground that he needed to see someone at Ikoyi Club and that was the last time he was seen alive.”

“When the billionaire could not return home, his family reported the incident to the police and investigation commenced. It is always good to disclose your movements to your family. It was his lawyer who unveiled the whole deal to the police.”

The Assistant Inspector-General of Police, Zone 2 Command, Ahmed Iliyasu, while speaking on the incident at a press conference revealed that the Adunukwe’s family urged the police to go after the suspects

Iliyasu added that four suspects identified as Daniel Ibeaji, 42; Arinze Igwe, 26; Solomon Cletus, 30; and Israel Obigaremu, 35, were arrested in connection with the crime.

He further stated that one medical identification card, an axe, remains of the victim in a bag, three AK-47 rifles, one pump action gun, one Ford SUV and property documents belonging to the victim, one Toyota Corolla car, a Nissan salon car, three Tecno phones, four Nokia phones, two Samsung phones and one Bontel phone were recovered from the suspects.

Iliyasu revealed that the deceased left his residence at No. 14 Maduke Street, off Raymond Njoku Street, Ikoyi, Lagos, on December 1, 2019, and never returned home.

He noted that the victim was declared missing, he revealed that he was strangled and injected with a lethal substance in a hotel room in Ajah.

Iliyasu stated, “The suspects specialise in hacking into unsuspecting members of the public’s Facebook accounts and the moment a person responds to a friendship request, the person is a ready-made target. Daniel Ibeaji, who claimed to be a medical doctor, is the kingpin of the syndicate.”

“It was Ibeaji, who approached the late Adunukwe with a business proposal to the tune of N900m, following which they fixed an appointment for the Artican Beach Resort, Ajah, Lagos, having asked the three other suspects to be on red alert for that operation.”

“After cajoling Adunukwe into signing the agreed documents, he lured him to his hotel room. In the hotel room, Ibeaji instructed one of his boys to fetch him a bag and pretended as if he wanted to hand over the money to the victim.”

“As the victim was about to open the bag, Ibeaji grabbed him from behind, while one of the boys hit the victim with an axe in the back of his head. Ibeaji then dragged Adunukwe into the toilet, strangled him and with the assistance of his boys, who held the victim down, injected him twice with a lethal substance. Convinced that the deed had been done, Ibeaji gave directives to the boys to evacuate the corpse and throw it away.”

One of the suspects who was identified as Cletus revealed that Igwe a former employee of the hotel directed them to take the corpse of the deceased through the back door.

He said, “It was Igwe, who directed us, and we moved the body through the back door of the hotel and through the laundry area. We chopped the body between 7 pm and 8 pm and it was within that same hour that we dumped him in the bush as the hotel is not far away from where the corpse was dumped.”

“Ibeaji was the person, who hit him before he asked us to go and kill him.”

The other suspects confirmed their involvement in the crime.

Iliyasu noted that Ibeaji was also involved in the murder of a commissioner in Bayelsa State, Depologa, whose remains were found on the Abuja Expressway.

He said Ibeaji’s second victim was one Jude Efulue, a property developer in Abuja, who swam into Ibeaji’s net and was held captive in an apartment and forced to sign a prepared document transferring the ownership of the victim’s property to him.

“His plan was to kill Efulue after sweeping his account clean. But with the help of neighbours, who called the police, Bob and his boys were apprehended and charged accordingly. It was at the Kuje Prison, where Cletus was also serving a jail term, that he and Ibeaji met and they reunited after leaving the prison to execute this dastardly act,” Iliyasu added.

The AIG said Ibeaji was currently undergoing trial at the Apo High Court in Abuja for two similar cases.