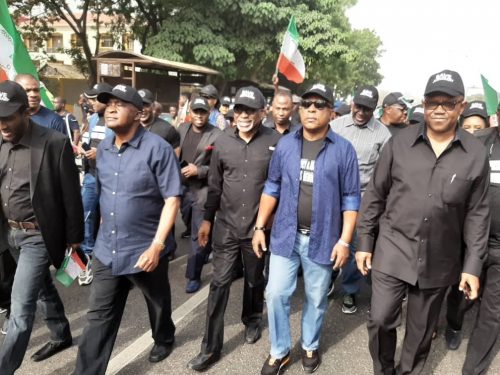 The National Chairman of the Peoples Democratic Party, Uche Secondus and former Anambra State Governor, Peter Obi has led thousands of Party supporters to protest in Abuja and against the judgment of the Supreme Court in 2019 Imo State governorship election.

Naija News recalls that the Supreme Court had on January 14 nullified the electoral victory of Emeka Ihedioha, the PDP Imo State 2019 governorship candidate. The apex court had held that the candidate of the All Progressives Congress, Hope Uzodinma, was the duly elected governor of the state and ordered that he be sworn in as the governor of the state.

The PDP protesters took-off from the PDP Complex popularly called the Legacy House in Maitama, Abuja, and are matching to the Supreme Court as of the time of filing this report.

Some of the PDP leaders at the protest include the PDP National Chairman, Uche Secondus; the 2019 Vice-President candidate, Peter Obi; and the Senate Minority Leader, Enyinnaya Abaribe. Also present are members of the PDP National Working Committee as well as the PDP Youth Leader, Ude-Okoye.

The protesters chant songs and carry PDP flags as well as placards with the inscription, ‘We are a united democratic nation, not the Banaba Republic. Do the right thing. Save Nigeria.’

Here some of the Pictures and Videos at the rally