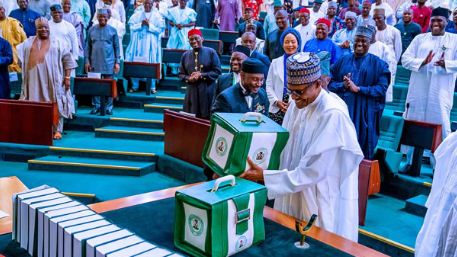 The former president of the Nigerian Bar Association who made his letter public through a press statement sent to Naija News applauded the federal government for laying the budget estimates in good timing which he described as record-breaking.

He also expressed hope that the Economic Advisory Council will give us a short turn around plan  that can create 10 million jobs annually, open the economy, expand local production and put the economy into double digits and pull millions out of poverty in addition to good education and healthcare.

KUDOS FOR ON TIME BUDGET PRESENTATION BUT MISSING FUNDAMENTALS REMAIN.

In a country of 200 million and 50% living in poverty, the budget reflects many missing fundamentals. The starting point with this budget is a diagnosis of our condition. I would diagnose that Nigeria is afflicted with malignant metabolic economic syndrome complicated by high inflation, high interest rates, mass unemployment, weak infrastructure, slow growth, unclear borrowing policy, unaccountable subsidy, etc..

To turn things around, I like to assume that you have charged the new Economic Advisory Council to give us short and immediate solutions. Working from my diagnosis of Nigeria’s economic disease, we need to work out a macro-economic development framework that lays out a harmonized fiscal, monetary, investment, legal, institutional and regulatory agenda. Fiscal policy or rate at which government spends, must be dramatically expansionary. We cannot have an anemic budget of N10 trillion Naira for 200 million Nigerians, which is equivalent to N50,000 per person, per annum. This will keep us in poverty abysmal when we need double digit growth!

On the basis of a GDP of 400 billion Dollars, the baseline annual budget should be 20% which approximates 20-30 trillion annual spend rather than the miserly 10 trillionbudget. Our annual spend is anemic and we have to infuse large money. For monetary policy, we need urgent quantitative easing, which is easing of all interest rates in particular to slack the heavy burden of high interest rates on lending afflicting long suffering Nigerians. We must be very proactive to look for new funds.

Traditionally, public revenue has depended on tax and oil receipts but there are far too many other sources- the Maritime sector is laden with cash, agriculture and the blue ocean, trade, the real sector, and controversial as it may appear, revenue that can be derived from new legislation on immunity from criminal prosecution. Government must consider legislation on criminal immunity to those who have plundered us, and we will likely see massive inflows of our money in foreign banks back to us. At present, the money is out of our reach anyway! I estimate 100 billion Dollars will flow back if we grant immunity from criminal prosecutions but with civil sanctions.

Engagement of the private sector in partnerships will yield a massive stock of revenue.  We need our Dangotes, Jim Ovias, Mike Adenugas, Innosons to be involved, just like the Chaebols of South Korea. I know that the Onitsha Nnewi Ogidi market axis can generate up to 10trillion Naira if the proper incentives are offered.

Foreign and domestic investments in infrastructure is possible if the proper legal institutional and regulatory environment is established. Public revenue will be enhanced by at least 3 trillion Naira if we rebase foreign exchange rates from N305 to N360 and remove fuel subsidy at once.

Additionally, we must review public expenditure. Far too much money is consumed by recurrent receipts. Downsizing government is a task that needs immediate attention by implementation of the Oronsaye report. Our public sector borrowing requirement needs review so that our revenue to debt ratio is less than 30%. Banks must focus on their primary function of lending not trading as we have seen in purchase of Treasury bills in excess of 400 billion Naira. Tax collection efficiency and not increase should be the the policy and Chairman Coker of FIRS and Governor Emefiele of CBN are 2 public servants deserving special mention for their innovation.

As an expert in Shipping and hydrocarbons, I query why government only sees dollars from a barrel of crude when the value chain has at least 34 soft and hard by-products other than crude oil. In my field, there is banking, shipping, legal and insurance, but very little of the cash from this value chain from crude oil stays in our economy. We need to reset the clock. I will assume that that the budget estimates is just the start of a turn around process of economic transformation.

Having held their meeting with you, can the Economic Advisory Council give us a short turn around plan to create jobs, opportunities and double digit growth? A good plan can create 10 million jobs annually, open the economy, expand local production and put the economy into double digits and pull millions out of poverty in addition to good education and healthcare.