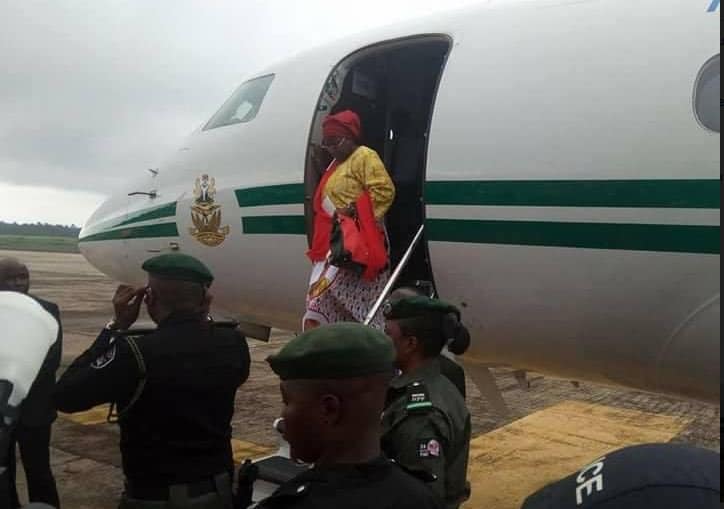 A report has emerged suggesting that Aisha Buhari, Nigeria’s First lady and wife of President Muhammadu Buhari, has left the country and is temporarily living in London, the United Kingdom over a purported crisis in the Presidency.

The First Lady has been out of the country for about two months now, raising concerns at Aso Rock, Nigeria’s Presidential Villa, a report monitored on Daily Trust newspaper by Naija News noted.

Naija News gathered that Mrs. Buhari left the country in protest against “certain developments” at the presidency.

Daily Trust quoted multiple sources at the presidential villa to have said that the First Lady, who left the country early August to Saudi Arabia to perform hajj (Muslim pilgrimage), has not returned to the country.

This online news platform recalls that Nigerian Muslims who participated in the hajj exercise in Saudi Arabia, have since returned home, but credible sources at the Presidential Villa told Daily Trust that the president’s wife has since left Saudi Arabia for London.

“Mama (first lady) is in London. It was from Saudi Arabia that she went to London,” one source told Daily Trust.

Asked when Mrs. Buhari is likely to return, the source said, “I don’t know. All I know is that she is in London.”

It was gathered that the absence of the First Lady became obvious after she did not appear alongside her husband at some recent official functions, followed by the way she was conspicuously absent during the Eid-El-Kabir celebration in Daura, Katsina State.

The President hosted many dignitaries including Guinean president, Alpha Conde, during the Sallah celebrations.

In early July this year, Mrs. Buhari supported her husband to host the Ambassador Extraordinary.

It has been observed that recently, at public events, the Senior Special Assistant to the president on administration, Dr. Hajo Sani, has been representing the president’s wife.

According to the report on Daily Trust, on September 25, the First Lady was represented at an event of the Organization of African First Ladies for Development (OAFLAD), on the sidelines of the 74th United Nations General Assembly (UNGA), New York by Dr. Hajo.

A statement from the Director of Information to the First Lady, the event was attended by first ladies of Zimbabwe, Sierra Leone, Uganda, and the Niger Republic while the President was one of the world leaders that attended the 74th UNGA.

However, checks on the First Lady’s Twitter handle @aishambuhari showed that Mrs. Buhari has remained active on the social media platform, as only six days ago she retweeted a post on the war against corruption.

The Daily Trust report added that efforts to get the reaction of her media aide, Suleiman Haruna, yielded no result, adding that a text message that reads: “In months, her excellency has been out of public glare, locally and abroad. She’s being represented by aides. Where is she?” was sent to him twice. It was first sent on Tuesday and Friday.

The report said the same text message was sent to a presidential spokesperson, Garba Shehu, yesterday, who replied that her spokesperson should be contacted.