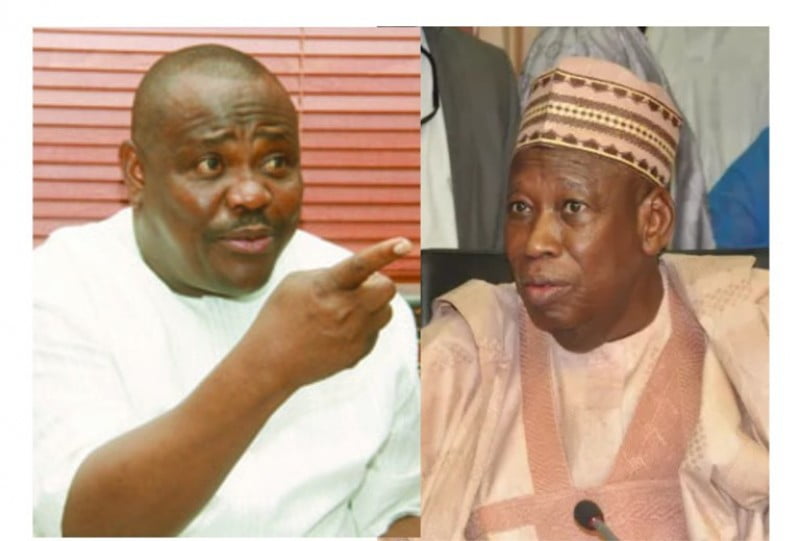 Governor Nyesom Wike of Rivers state has reminded his Kano state counterpart of his bribery scandal after a threat by Dr. Ganduje over the alleged demolition of Rainbow Town Central Mosque in Trans-Amadi area of Port Harcourt, Rivers State capital.

Naija News recalls that Governor Abdullahi Ganduje, for threatening to take him to court over the reported demolition.

Reacting to Ganduje’s threat, Governor Wike in a statement released by his media aide, Simeon Nwakaudu, said the Kano state governor should be reminded that he, Wike, is not a dollar bill Ganduje can pocket” sheepishly and recklessly”.

It beats my imagination that Kano State Governor, Abdullahi Umar Ganduje is still in the habit of making irresponsible comments about Rivers State. Up till now, Ganduje is yet to realize that Governor Wike is not dollars that he can pocket recklessly and sheepishly.

speaking further Wike Explains that the story of the demolished mosque was a fabrication by one Alhaji Tobacco.

The story was a fabrication by one Alhaji Tobacco. The fabrication was orchestrated by Daily Trust and The Nation Newspapers for obvious mischievous political reasons. These baseless press releases confirm the ugly plot.

Ganduje was involved in a bribery scandal last year after footage of him purportedly receiving wads of dollar bills from contractors in his state surfaced online. Declaring of Rivers state, a Christian state is reckless, Senator…