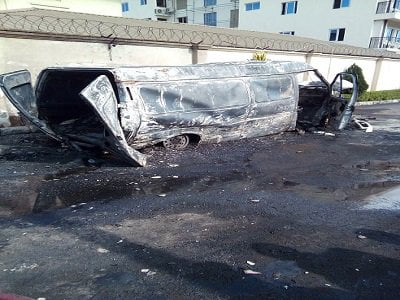 A bus, which came to supply diesel to an elementary school in the Ikeja GRA, Greenville Schools on Thursday went up in flames.

As at the time of this report, the cause of the vehicle that went up in flames is still yet to be ascertained, however, thick smoke enveloped everywhere, as residents tried to put out the inferno.

This online news platform understands that the officials of the Lagos State Fire Service arrived at the scene as residents jostle to put out the inferno with their extinguishers.

The residents have repeatedly battled with the inferno for hours until the intervention of the fire service officials who later put out the inferno.

Police officers from the Ikeja command stormed the scene to help maintain normalcy in the area as no casualty was recorded in the incident.