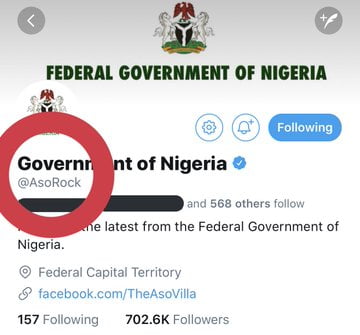 The federal government of Nigeria on Thursday, announced a change in the name of the government’s official twitter handle.

It noted that the handle now has the name @NigeriaGov and no longer @AsoRock.

The statement released on the development noted that the change of name was necessary to reflect the fact that the handle represents the Federal Government of Nigeria and exists on its behalf.

“NOTIFICATION: Twitter Handle Change | From @AsoRock to @NigeriaGov, to more accurately reflect the fact that this handle represents, and exists on behalf of, the Federal Government of Nigeria,” the tweet reads.

Twitter Handle Change | From @AsoRock to @NigeriaGov, to more accurately reflect the fact that this handle represents, and exists on behalf of, the Federal Government of Nigeria.

Thank you for following. pic.twitter.com/c3yIHS2RQ6

The name change has attracted several reactions from Nigerians. Here are some reactions on Twitter:

God Punish All of Una for that Place.
Na Twitter Handle we go Chop?

From Changing of Portrait Picture Now Change of Twitter Handle.
Make una do us Well Change Buhari too.

When will Nigeria create their own social media software that can be useful for both our govt and the citizen. We need to create our own social network.

How this take reduce the price of fuel , rice, transportation, and light for Nigeria?

Guys, don’t change the name of the country cus the way you guys are changing, one is wondering what’s next to change. Also hoping all this changes will better/positive to the ordinary man in the street suffering to survive. #bubu

This is a welcome development. ‘AsoRock’ does not clearly reflect the government of Nigeria. More so, not everyone in world could relate AsoRock with Nigerian government. Kudos to the change.