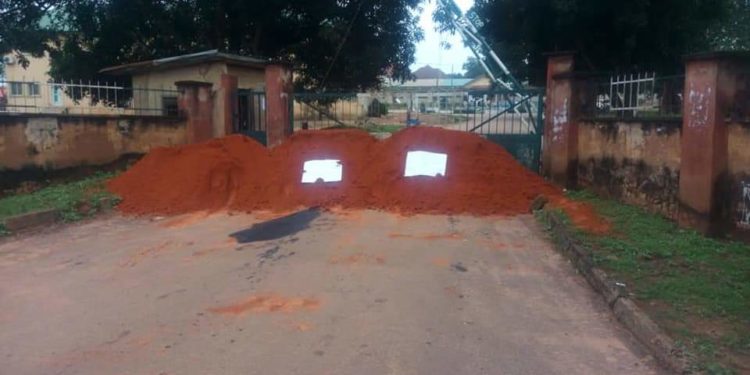 Residents have in their large numbers taken to the streets of Auchi, the headquarters of Estako West local government area to protest over the suspension of the council chairman, Yakubu Musa popularly known as Yakson.

Naija News understands that the protesters used trips of sand to barricade the entrance to the council secretariat to prevent staff from resuming duties.

The protesters took to the streets in Auchi, armed with placards of various inscriptions such as; ‘Yakson is prudent’, Estako people say no to oppression’.

In a statement obtained by Naija News, some of the protesters linked the suspension to the supremacy battle between Governor Godwin Obaseki and Comrade Adams Oshiomhole of Edo state.

They said Yakson was removed because of his closeness to Oshiomhole.

With diverse claims, another claim was that Yakson uncovered salary fraud perpetrated by some powerful individuals and reported to appropriate authorities but was suspended instead of being commended.

Meanwhile, Commissioner for Local Government and Chieftaincy Affairs, Mr. Monday Osaigbovo while speaking, described the protest as unfortunate, adding that the protest was uncalled for except the people do not want development and their funds frittered away.

In his words, the commissioner said; “It was discovered that salaries were going up every month when new staff were not employed. The ICT discovered that over 80 ghost workers were receiving N6m monthly.